What’s the meaning behind these popular Christian symbols?

Christian symbols are everywhere. We see them in art, jewelry, and even adorning the vestments that priests wear at Mass. Some of them we may know what they symbolize and where they come from. Others may be foreign to us, but we see them and just go with it because there has to be a good reason they are there, right?  I may not be able to cover every Christian symbol with this blog post but I can certainly give you the knowledge to identify some of them. Maybe once you know the meaning behind them,  they’ll begin standing out to you everywhere. 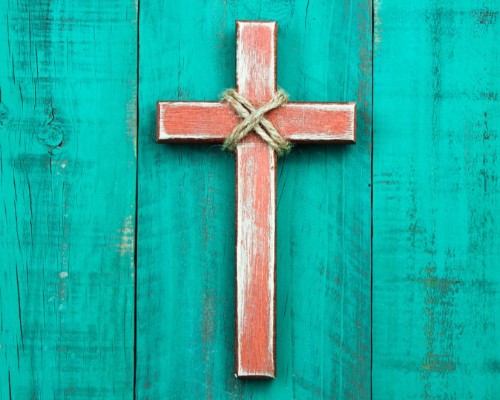 The next Christian symbol I want to look at is one that you will see often times on altars or even on priestly vestments. It is a pelican feeding her young.  In the depiction of the symbol you see a mother pelican with her beak at her breast and the young pelicans at her feet as they eat. The pelican is a symbol of the Eucharist. St. Thomas Aquinas even uses this image in one of his hymns when he writes “pia pelicana”. It was once believed that mother pelicans, if they could not find food for their young, would take their beak and pierce their own breast and allow their chicks to feed on the blood that would pour from their wounds. You can see how this would make it the perfect symbol for the Eucharist, the young gaining nourishment from consuming the blood freely given from the mother. Even though we now know that the pelican does not do this, the powerful imagery of the symbol causes it to still be used. Look for this symbol especially in churches in the sanctuary or on the back of the chasuble used by priests when they celebrate Mass. 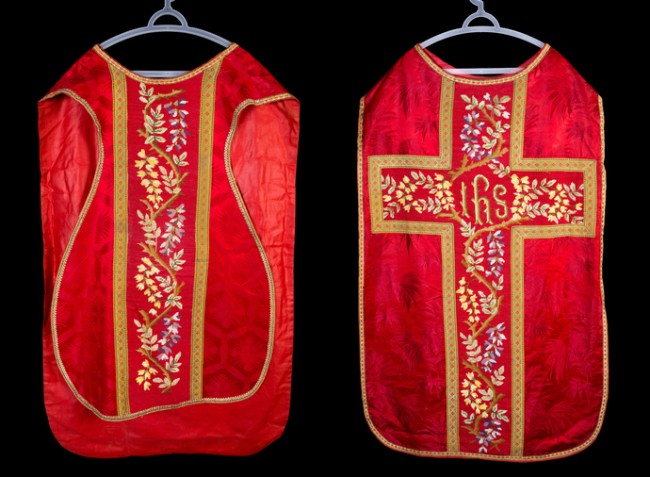 Another symbol you may also see on priestly vestments or on altars are the three letters “IHS”.  In fact, my own vestments have this on the back. When I took a group of high schoolers to Rome some time ago, we were looking around the churches and began seeing these three letters in all kinds of places. When the students asked me about it, I was ashamed to say that I didn’t actually know what it stood for, so I went and looked it up. In short, IHS are the Latinized form of the first three letters of Jesus Christ in Greek. As the New Testament was originally written in Greek, the name of Jesus Christ was often written in Greek and so the first three letters were used as a symbol. As Latin became the dominant language in the western world the Greek letters were Latinized and IHS was the result. This is the origin of the symbol, but the symbol has been interpreted other ways as well. “In hoc signo” is a common one as is the English “In his service”. I’m not saying that these are not valuable ways to look at this symbol, but they are not the original. 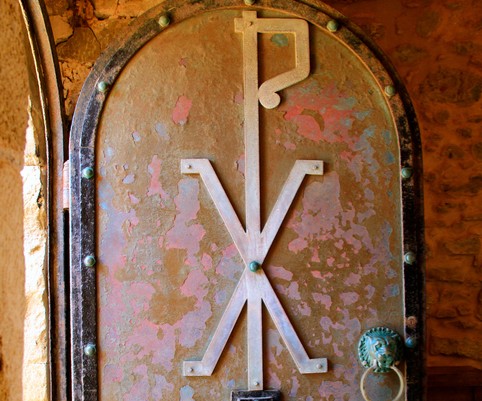 IHS, or the first three letters of Jesus Christ, are called a Christogram. A Christogram is a monogram or representation of the name of Jesus Christ. It is not the only Christogram. The Chi-Rho is another very popular Christogram. Chi and Rho are the first two letters of Jesus Christ in Greek. This symbol became very popular because of the story of Constantine’s conversion to Christianity and his conquering of the Roman Empire, which is a pivotal moment in Christian history. As Constantine was marching on Rome in 312, he had a dream in which he was told that under “this sign you will conquer.”  What he saw was the Chi-Rho. He instructed all of his soldiers to paint the Chi-Rho on their standards and banners before marching into battle. After winning the battle, Constantine became the Roman Emperor and legalized Christianity. He would eventually be baptized on his deathbed (a common practice at the time) and the course of Christian history was drastically changed.

The Fish or Ichthys 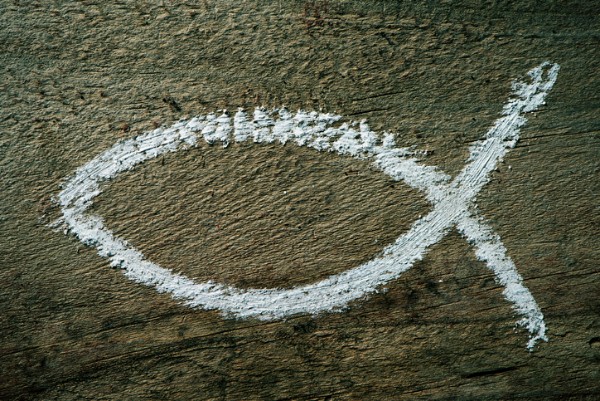 A symbol that is not a Christogram but does have a Christogram as its basis is the fish. You will even see this symbol on bumper stickers, both for Christianity, and used by those mocking Christianity. It is an ancient symbol. If you were to write out “Jesus Christ, Son of God, Savior” in Greek the first letter of each word of the phrase would spell Ichthys, which is the Greek word for fish. For this reason the fish became a symbol of early Christians and a sort of code to identify themselves to each other. If one person drew the first arc which would be half of the fish and the other person knew the “code” they would complete the drawing and each of them knew they were safe disclosing and talking about their shared belief in Jesus Christ. The association of the fish symbol with Christians has stuck through the millennia and is now fairly universally recognized. 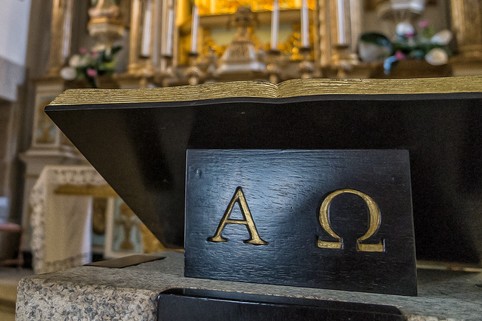 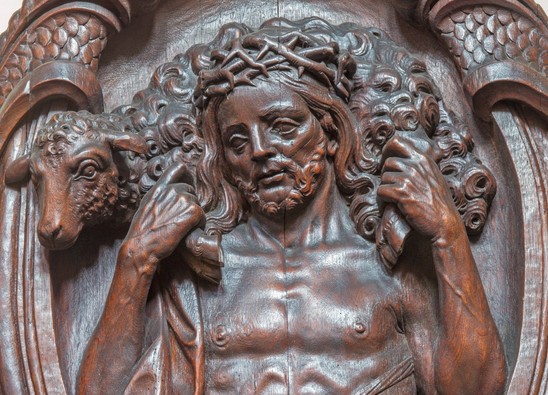 Moving away from symbols based on letters we get to images of Jesus Christ. One of the earliest symbols of Jesus Christ is that of the “good shepherd”. This image adorns many of the catacombs throughout Rome that the ancient Christians used to gather to celebrate Mass in secret and at times to hide from their persecutors. The primary image of this is of the shepherd carrying the sheep on his shoulders which is taken from the parable that Jesus tells of the shepherd who leaves the 99 sheep in search of the one lost sheep to bring it back. This image of Jesus as the Good Shepherd is used frequently in our time, with a Sunday in the year even dedicated as “Good Shepherd” Sunday and a day chosen to focus on vocations to the priesthood. 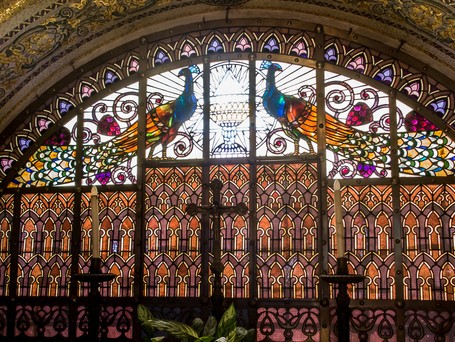 Another animal based symbol of Jesus Christ is the peacock. Although this symbol is harder to find on altars, in churches, or on priestly vestments in the west it has a long history. Similar to the history of the pelican symbol, it comes from a previously held belief about the animal that has since proven to be false. The Ancient Greeks believed that the flesh of the peacock did not decay after death and so even the Greek pagans would use the peacock as a symbol of immortality. So, with the belief in the resurrection, the early Christians adopted this symbol as representing the immortality of Jesus Christ in the resurrection. Early art, especially coming from Greece, will use this image and its’ usage is still popular in the Eastern Churches, especially around Easter. 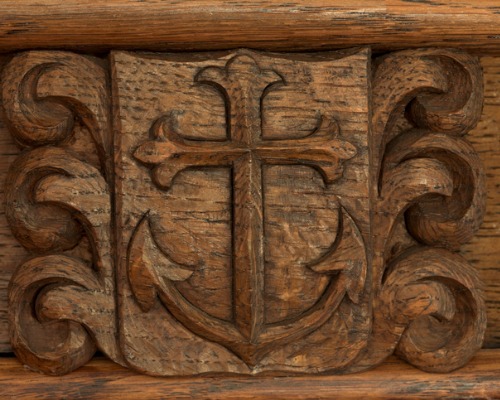 The final symbol I want to look at is the symbol of the anchor. This symbol has been heavily adopted by the Holy Cross Fathers who run the University of Notre Dame. It’s symbolism is pretty straight forward. An anchor represents safety. Being able to drop anchor meant you were somewhere safe. Thus the safety of heaven became something that early Christians would look forward to with hope in heaven amid the turbulence of their earthly lives. Thus the anchor represented especially hope, a hope in heaven. You can find this imagery in art, on altars, in churches, and on vestments. It is a common image.

These are certainly not the only symbols of Christianity that you will see as you begin to look around, but they are common ones and ones that you may not have known the origin of, nor what they represented. Hopefully, as you know what the symbols mean you will begin to see them around and share your knowledge with others if you spot them in a painting, mosaic, altar or other work of art. Additionally, knowing what the symbols mean can help us appreciate the meaning of the artwork and use the artwork to grow in holiness and to grow in our relationship with Christ, which, of course, is the most important thing.