If we had lived in Italy during the 19th century, St. John Bosco would’ve been a household name.  His personal service to the Church, and that of the Salesian religious order that he founded reached far and wide throughout Europe.

St. John was born in Turin, Italy in 1815 to a poor family, and lost his father at age two.  He was ordained a priest in 1841.  Perhaps the tragedy of losing his father spurred him to the mission that he was best known for: reaching out to troubled youth.  The more proximate cause of ministering to troubled youth was seeing the squalid condition of the nearby prisons, in which children were incarcerated along with adults.  A meeting house where St. John could instruct boys was founded in the late 1840s burgeoned into the Salesian religious order approved by the Vatican in 1874.  By the time of his death in 1888, 250 houses had been established throughout the world.  The work of the society in the 40 years of St. John’s earthly life produced a staggering 6,000 priests and innumerable riches in converted souls.

Everything Pope Francis has described as the model of a priest, St. John Bosco was: he had the smell of his sheep, went out to the margins, lived a life of grace and the sacraments, and was zealous for souls.  St. John was also a mystic, and the primary medium of his mystical experiences were vivid dreams.  Whether we are young or not so young, St. John Bosco was a man of great holiness whose life could teach us all some lessons.  From his dreams, his biography, and the communities he started, I think there are seven main lessons we can learn from St. John Bosco.  With the turmoil in the world and within the Catholic Church today, St. John Bosco is a timely intercessor and teacher for our times.

1. Fervent devotion to and trust in Our Blessed Mother

The saint himself had a strong devotion to Our Blessed Mother, and he extolled his boys to the same end.  One recurring thread to his dreams was seeing the boys attacked by a monster or wild animal—and these represented demons.  Our Lady herself appeared in some of these dreams, spreading her mantle wide for the boys to run into.  As soon as the boys entered her protection, the beasts could not harm them.  Do you have bad habits, vices, troubles, or demons?  Or have a broken heart over the multiple scandals in the Church today?  Run to the intercession of Our Lady.  She is the woman foretold that has enmity of the devil (cf. Gen 3:15); she is ready to fight for your soul if you only ask for her prayers.  She sees us as her children and wants her entire family to come to salvation in Jesus Christ.

2. Hell is real, and the spiritual life is not to be taken lightly

There is a heart-warming aspect to some of St. John’s dreams; others teach a straightforward principle; other dreams were simply terrifying.  His most harrowing dream was a vision of the road to hell, and hell itself.  While there, St. John saw some of his boys on the road that led to the gates of hell: a spacious, beautiful road lined with flowers (cf. Matthew 7:13) and with traps to snare those walking.  As terrible of a thought as it is, our fallen nature makes it possible for every one of us to choose sin over God—and thus choose hell over heaven.  If everyone automatically went to heaven, there’s really no point to engaging in the spiritual life.

In our times, it’s much more common and socially acceptable to believe that a loving God would not send His own creations to hell.  It brings up images of vengeance and smiting, and God is distorted from a loving Father to an angry one.  Not only is this antithetical to the Church’s teaching, but hell is also a necessary companion to our free will.  Even if hell is completely empty, it has to exist.  It’s logically contradictory to think that God would give free will to humans on earth, but not in the afterlife; that is, He would essentially be forcing everyone to go to heaven.  If a soul is determined to refuse the company of God on earth, God gives them that same right at that soul’s judgment.  God respects free will so much that He created a place for those that refuse eternal communion with Him. 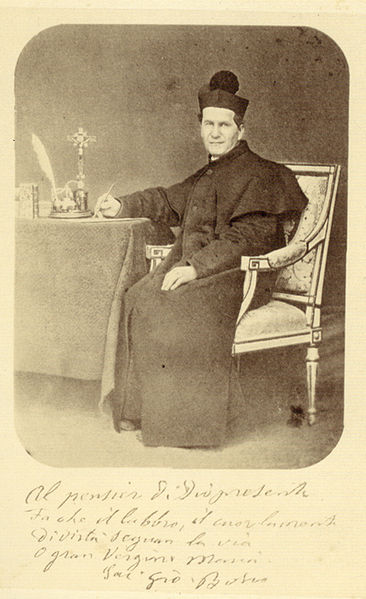 3. The centrality of the Eucharist & Our Blessed Mother

Aside from his dream about hell, the dream of the two pillars is Bosco’s most famous dream.  He saw a naval battle raging, as a fleet and especially its flagship was under attack by many smaller ships.  The captain of the flagship was the pope, and amidst the pitched battle, the pope steered the flagship in order to anchor it to two massive pillars that stood out of the sea.  The first pillar had Our Blessed Mother on top of the pillar, with the words “Help of Christians” underneath.  The second pillar featured a proportionately-sized Consecrated Host, with the inscription “Salvation of believers.”  As soon as the flagship was doubly anchored, the battle was won and the enemy ships either scattered, were sunk, or they rushed to the side of the flagship to join her.

The interpretation of the dream illustrates two essential elements to the Catholic spiritual life: the Most Blessed Sacrament and Our Lady.  In the Blessed Sacrament, we commune with Jesus—in order that we might become further joined to Him.  When we receive communion at Mass, the Word becomes flesh and incarnates in us.  And in Our Lady, we have a loving mother whose powerful intercession exceeds all others.  Take some time to reflect on these promises of Our Lady to those who pray the rosary.  God makes tremendous graces available through her intercession!  Toward the end of his life, St. John personally testified to the effect of Our Blessed Mother in his life: "I have been an instrument in the hands of Mary. She has done everything. Had I been a worthier instrument, I would have accomplished a great deal more."

4. Anyone can live a holy life

One of the lies that the devil tries to sell us is that holiness is the job of priests, nuns, pious old ladies, and people other than us.  St. John worked with his fellow priests, local secular authorities, young people, boys from impoverished families, and every other sort of person.  He would tell his boys, “Sanctity is easy!” and emphasized that the way of holiness was meant for every person.

The days might be hard, but the principles are easy, according to St. John: do your duty at home/school/work, doing the best you can.  Offer your life to God, whether in good times or bad, suffering or joy.  And recognize sufferings as those things that have the power to transform us into saints.  Don’t forget that grace fills up what is lacking in us, and enables us to do things we could not do on our own power. 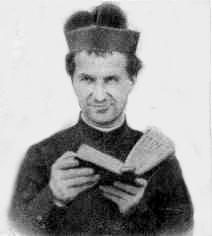 5. How to approach sinners

One of the spiritual works of mercy is to admonish sinners, and it’s one of the trickier ones.  On one hand, the truth of the Catholic faith, based on Jesus Who IS the truth, should be our impetus for evangelization.  On the other hand, it’s easy to slip into all sorts of uncharitable approaches in trying to correct and convert sinners.

St. John gives us some help in this regard.  He noted how patient Our Lord was with the apostles.  And, Jesus “treated sinners with a kindness and affection that caused some to be shocked, others to be scandalized, and still, others to hope for God’s mercy. And so he bade us to be gentle and humble of heart.”   It’s important to note that this approach is a means to an end and not an end in itself.  Kindness and mercy are imperative, but they open the door of the listener to the gospel and the love of Jesus.  Not correcting a sinner would end up directly or indirectly affirming sin.

St. John first had a mystical dream as a nine-year-old.  Seeing a rowdy group of boys, young John tried to stop them.  Then a man appeared, telling John, “Not with punches will you help these boys, but with goodness and kindness!”  Next, a woman appeared; the group of boys transformed into a vicious pack of wild animals.  The woman stretched out her hand, and the beasts turned into lambs.  This confused John, and he asked the woman what it all meant.  Her answer: “This is the field of your work. Be humble, steadfast, and strong!”

Conquering in kindness and humility joined to strength might seem contradictory on the surface.  Kindness can be used as a spiritual weapon just as Jesus did during His Passion.  Jesus fought sin and death on His turf: His Sacred Heart.  Jesus took all the blows of evil and drowned them in the abyss of His divine love.  It takes tremendous restraint to turn the other cheek—but if we do, we can tap into the grace of Jesus’ Passion.  Authentic humility is not the absence of strength, but it requires it. 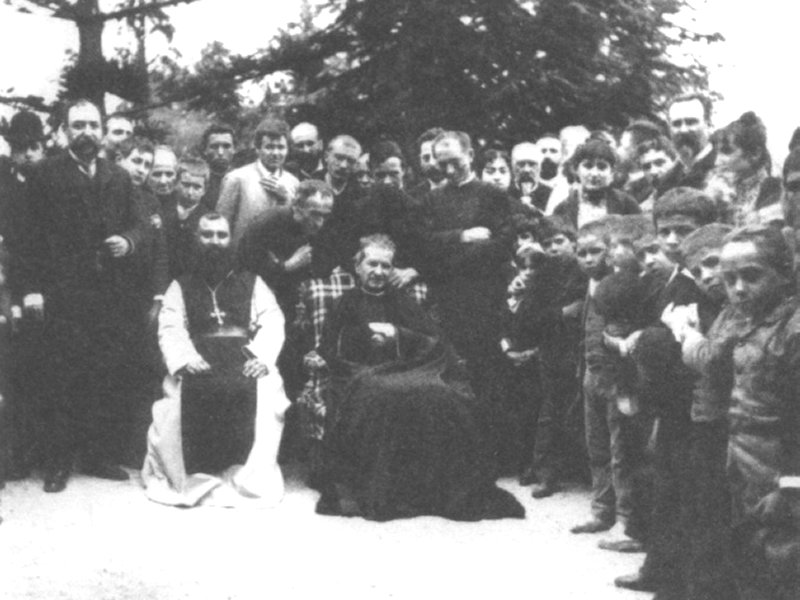 Early in his priestly ministry, St. John picked up some magic tricks from itinerant circus performers, in order to put on a show for the boys of the town.  The show was actually the opening act: after the fun, St. John repeated the homily from that day and prayed with the group that was present.  Had he started straight in with the homily, would many of the youth had stayed to listen?  In the same vein, one of the aims of St. John’s ministry to the youth was simply to spend time with them.  He took them on outings and they had fun together.  So-called troubled boys needed things to do, other boys to hang out with, and a strong mentor to bring it all together.  To the outside eye, these troubled boys all of a sudden were not so troubled after being in one of St. John’s oratories.

Are there any young people in your life that need that approach?  Can you bring Christ to them like St. John?

St. John Bosco, pray for us!