Who is the Priest Behind the Big Bang Theory?

The beginning of time is an enigma that has instigated exploration of the universe and has sparked profound love for creation and for the Creator. The universe reminds humanity of its smallness and humility but also calls man to look beyond himself to the wonders that exist beyond his comprehension. Some scientists view these wonders as mere coincidences and random combustion of atoms and particles. Not so with Father Georges Lemaître.

Lemaître had both a deep curiosity for the unknown and a reverence for the Creator of it all. This Belgian priest and astrophysicist showed that “religion and science — or at least physics — did not have to be incompatible.” Lemaître showed that it was possible for faith and science to intertwine yet he also distinguished his religious belief in the origin of creation from his scientific research on the expansion of the universe. As a faithful Catholic, he believed that the Genesis account of creation was not written to express how or when the universe was created. It was written to show humanity why people exist and who authored it all.

And yet, the Creator designed the human brain to desire to know more about Him and His world, and so Lemaître saw his exploration of the cosmos as a way of gaining more knowledge with love. For knowledge without love is nothing, as St. Paul explains, “And if I have prophetic powers, and understand all mysteries and all knowledge, and if I have all faith, so as to remove mountains, but have not love, I am nothing” (1 Corinthians 13:2). Before exploring how Lemaître used his love and knowledge together in his development of the Big Bang Theory, let us explore his life and achievements. 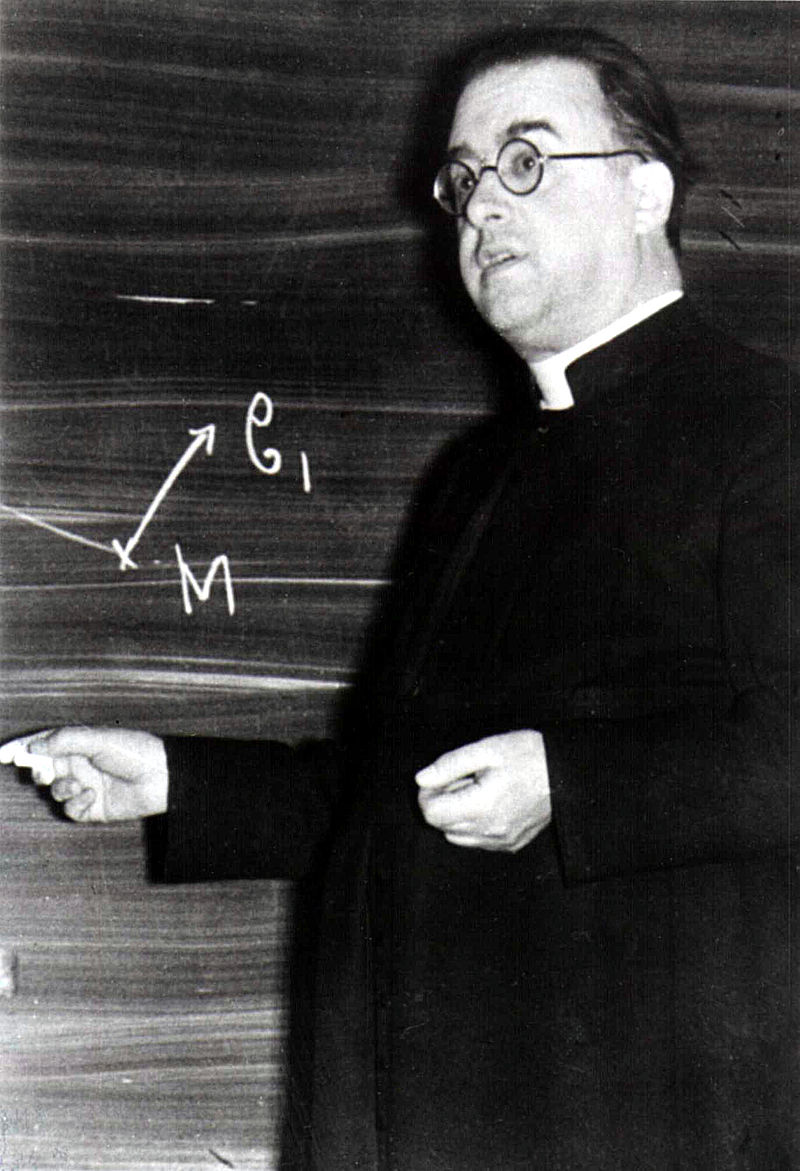 Lemaître was known to be a jovial and humble man, the absent-minded yet wise professor, and greatly loved by his students and parishioners. He received several degrees from distinguished universities and worked with famous scientists on discovering more about the universe. Throughout his life of scientific research, he remained a faithful Catholic and priest.

He started out at the Jesuit College of the Sacred Heart in Charleroi, Belgium then moved on to study civil engineering at the Catholic University of Leuven. When World War I broke out, he became an artillery officer in the Belgian army, where he received the Croix de Guerre, a French military award for feats of bravery. During the war, he spent his spare time reading Henri Poincaré’s Électricité et Optique, which led him to switch directions and study physics and math. While studying science, he began to discern the priesthood, a dream held since he was nine years old! It was in seminary that he discovered Albert Einstein’s work (General Relativity theory), under the supervision of some of his professors. In 1920, he received his doctorate, and in 1923 he became a priest.

It is clear that he remained devoted to his vocation as a priest even as a scientist because of his writings and the way he lived his life. During his annual 10-day silent retreat, he would journal thoughts that merged his two passions: spirituality and scientific research. Although he distinguished his scientific work from his religiosity, he did not separate them. As he explored the miraculous cosmos more, his love grew for the Creator who designed it.

Lemaître’s life was of perpetual learning. He won a scholarship to Cambridge, where he studied under one of the leading astrophysicists in the world, Sir Arthur Eddington, who taught him the latest research in cosmology and astronomy. He then continued onto Harvard, where he worked with American astronomer Harlow Shapley. There, he discovered the solution to Einstein’s equations describing an expanding isotropic matter-filled universe. He won a second fellowship to MIT and completed a second doctorate while working with two other American astronomers, assembling proofs and data for his new theory.

When Lemaître was not researching, he was teaching as a professor, and he was greatly loved by his students. He often was a target for the engineering students’ annual variety show, but he always took it with good humor.

Lemaître was not only recognized by scientists and educators; he was also recognized by the Vatican for his devotion to the faith and to science. In 1936, he was appointed by Pope Pius XI as an inaugural member of the Pontifical Academy of Sciences, a scientific academy devoted to the progress of the mathematical, physical, and natural sciences and the study of related epistemological problems.

What is the Big Bang theory? 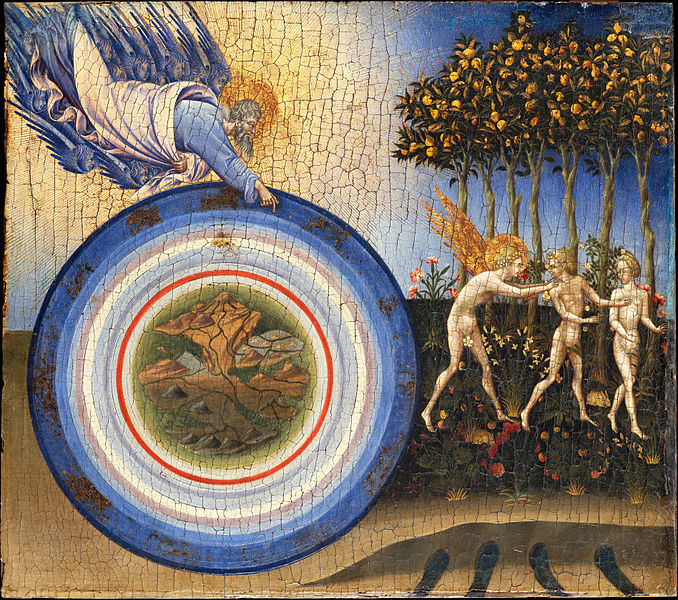 This will only scratch the surface of the theory that Lemaître worked on for his entire life, but it will give a glimpse into his mind and work.

The Big Bang Theory states that the observable universe evolved from a single particle at a definite first moment in time. He clearly distinguished the moment of creation of the universe ex nihilo from its subsequent expansion. The moment of creation tied into his Catholic beliefs in a Creator, but his discovery of the expanding universe tapped into his purely scientific research. Pope Pius XII saw this new theory as a scientific validation of the Catholic faith, but Lemaître clearly disagreed with him, as his scientific research did not have the purpose of proving his faith.

It was in 1927 that Lemaître revealed his innovative idea of an expanding universe, the theory we call Hubble’s law before Hubble discovered it himself! Two years later, Hubble discovered the same thing, and the two of them toured the U.S., giving lectures about their research. As many radical and new theories are often treated, their theory was ignored at first. Einstein himself was hesitant. Nevertheless, Lemaître’s findings were published in 1929, which forced his former teacher and Einstein to rethink their own ideas.

Eventually, the Big Bang Theory was taken seriously, and other scientists, such as George Gamow, began to develop and modernize it.

What is the Big Bang Theory’s relationship to religion? 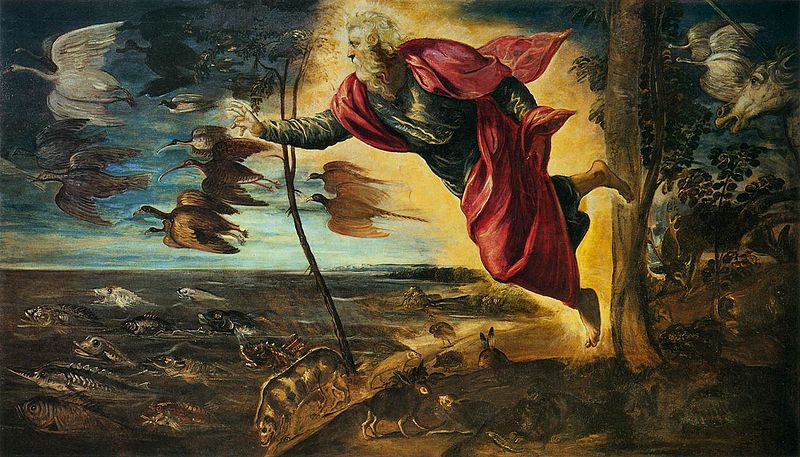 For Lemaître, his scientific research of the Big Bang Theory concerned the discovery of creation but not a search for religious Truth. Religious Truth could be found in Scripture and in Divine Revelation, but it could not be “proven” like scientific data. Faith, by definition, is the “confidence of what we hope for and the assurance of what we do not see” (Hebrews 11:1); therefore religious Truth is so much more than mere data. Lemaître explains how scientific research of the universe pertains to both the believer and non-believer:

“As far as I can see, such a theory remains entirely outside any metaphysical or religious question. It leaves the materialist free to deny any transcendental Being… For the believer, it removes any attempt at familiarity with God… It is consonant with Isaiah speaking of the hidden God, hidden even in the beginning of the universe.”

He believed that science helps us understand the physical cosmos while religion teaches truths important for salvation. Science is not discordant with scriptural revelation and vice versa. In reading the creation account in Genesis, Lemaître believed that the only thing to take literally from Genesis is its divine mandate to observe the Sabbath. The number of days and the way in which the author describes God creating the world are meant to point us to the significance of the order of creation. The order expresses God’s profound love for His creation, especially for His children, the Imago Dei. God desires His children to primarily care about Who created them and why they were created: to glorify Him and be happy with Him forever. Exploration of God’s world is pleasing to Him, as long as it always draws the explorer closer to God.

Father Georges Lemaître is not a name well-known to the ordinary world, but he was a faithful priest, professor, and scientist who clearly loved both the Creator and His creation.