Here Are the 10 Oldest Images of Christ

Art is an amazing way through which we may better pray and contemplate the depths of Christianity.  Although there are many familiar examples of modern Christian art, looking to the very first images of Christ in art allows us to see how Christ was perceived by the early church.  Understanding these oldest pictures of Jesus help us see that Christ reveals himself to his Church in a multitude of ways, which allows us to draw closer to Him in our understanding of his presence in the world.

This image, dating from the third century, is one of the oldest known images of Christ being worshiped by the Magi.  The structure of this image, with each of the three Magi in line waiting to give their gifts to the Child Jesus, has become a familiar structure in representations of the Adoration of the Magi through the centuries.  Cast from a sarcophagus found in the Catacomb of Priscilla, its bold strokes are far beyond its time with respect to artistic style.  The Catacomb of Priscilla, located in Rome, was used for Christian burials in the second through the fourth centuries, and was notable because at least two popes were buried there in addition to many holy Christian martyrs.  (The remains of St. Philomena were found here as well.)  This catacomb also holds many other works of early Christian art, from images of the Annunciation to Christ as the Good Shepherd. 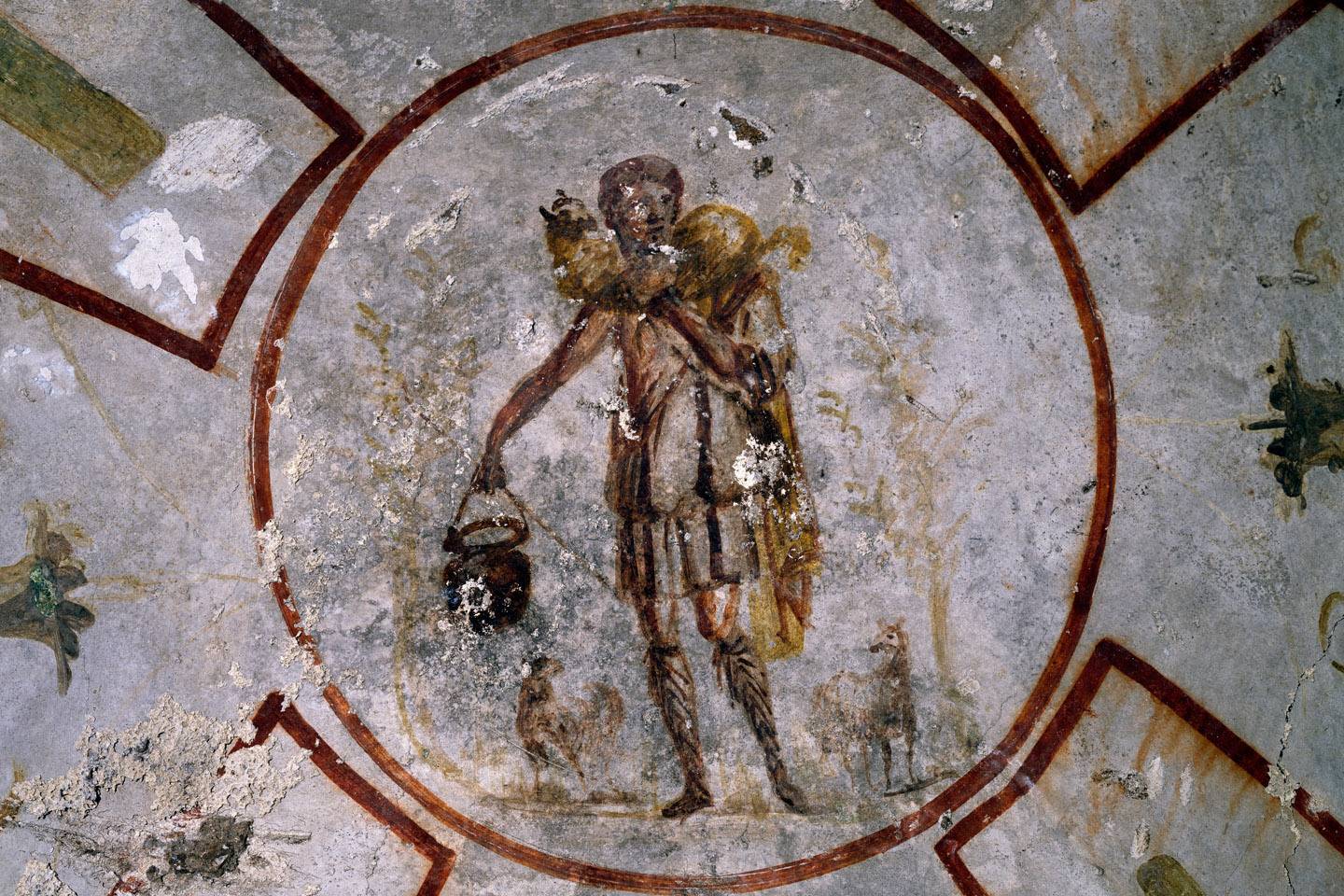 This image of Christ as the Good Shepherd was found in the Catacomb of Callistus, an extensive catacomb and burial ground again located in Rome.  It is a ceiling fresco which dates to the third century, and portrays a remarkably youthful Christ carrying a lamb.  Although Christianity utilized the image of a Good Shepherd to describe the relationship of Christ to his flock, or his Church, the image of a man bearing either a lamb or a calf is an ancient one. It was a popular motif in Greek sculpture and was known as a moskophoros, or “the bearer of the calf.”  Seeing this motif appropriated to reflect Christian themes reflects the fact that the Church permeates culture, and its message remains timeless throughout centuries. 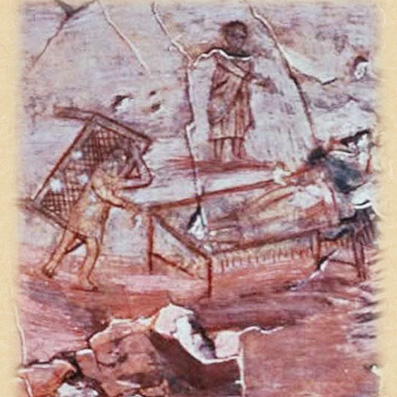 The Healing of the Paralytic, a fresco found in the third-century Dura-Europos church in Syria, is one of the many early Christian images which represented miracles performed by Jesus.  The Dura-Europos church is the earliest known Christian house church, which is to say that it was simply a residence that was transformed into a setting appropriate for Christian worship.  The frescoes were taken from the room that served as the baptistry, which leads us to the inspiring idea that baptism is a type of miracle that serves as a parallel to the healing of a paralytic, as baptism raises the soul from a broken state to a whole one.  This depiction of Christ likely recalls the words of the Gospel of John, in which Jesus heals the man who had been unable to walk for thirty-eight years by saying the words, “Rise, take up your pallet, and walk.” 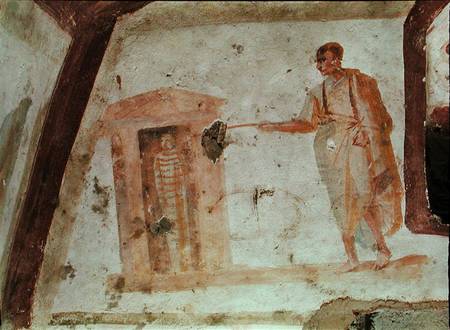 This third-century fresco of Jesus raising his friend Lazarus from the dead was found in the Catacomb of Callistus, the same catacomb in which early images of Christ such as the Good Shepherd reside.  Although it is not recognized as the oldest image of Christ alone, it is the first known representation of Lazarus, particularly in his state of resurrection.  It was popular in early Christian times to show Jesus in his role as a miracle worker, since knowing Jesus as a miracle worker was an expedient path to knowing him as a savior. 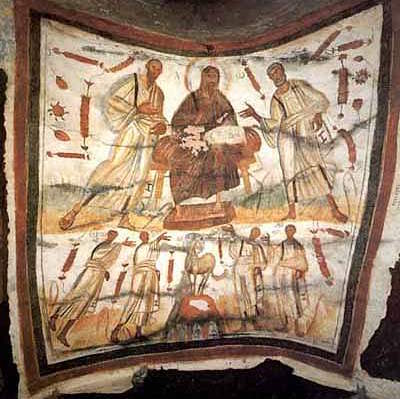 This fourth-century fresco from the catacombs of Christian martyrs Marcellinus and Peter shows Christ between the two disciples Peter and Paul.  At their feet stand the four martyrs Gorgonius and Marcellinus, Peter and Tiburtius, separated into two groups by the Lamb of God.  Saints Marcellinus and Peter were, respectively, a priest and an exorcist.  Our knowledge of them comes from the Martyrologium Hieronymianum, an influential list of Christian martyrs attributed to St. Jerome.  Due to their presence on this respected list, their tomb was widely venerated, even as early as the seventh century.  This image of Christ shows that martyrs, who willingly gave their lives for Christ and his Church, are truly his disciples and should be venerated for their holiness and incredible sacrifice. 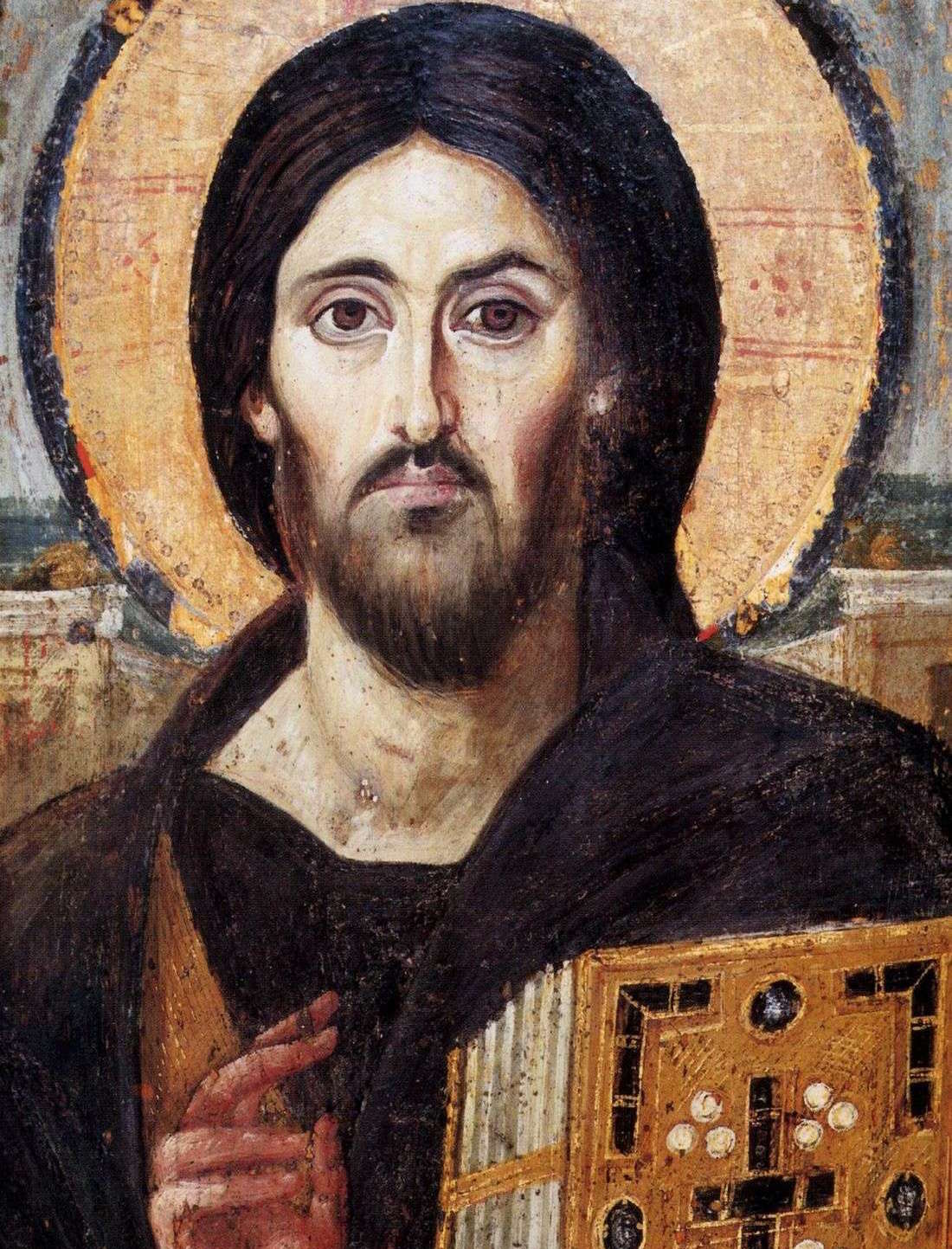 This icon of Christ the Pantocrator, dating from the sixth century and believed to have been produced in Constantinople, is one of the oldest surviving Byzantine icons and is known as the first representation of Christ the Pantocrator.  “Pantocrator” is a term that comes from the Greek language, and means “all-powerful” or “ruler of the world,” and is connected to the ideas of Christ sustaining the world in its movement and presiding over it with omnipotence.  This is a beautiful and intriguing image, for it is apparent that the two sides of Christ’s face are asymmetrical and in fact quite different.  Many speculate that this particular icon aims to symbolize the duality of Christ’s person, namely his humanity and his divinity.  It is said that the left side of his face represents his humanity, and the right side represents his divinity.  Located in St. Catherine’s Monastery in the desert of Sinai, this icon has survived the era of iconoclasm (where religious images were perceived as heretical), and resides currently at the monastery along with over 2,000 other works of art. 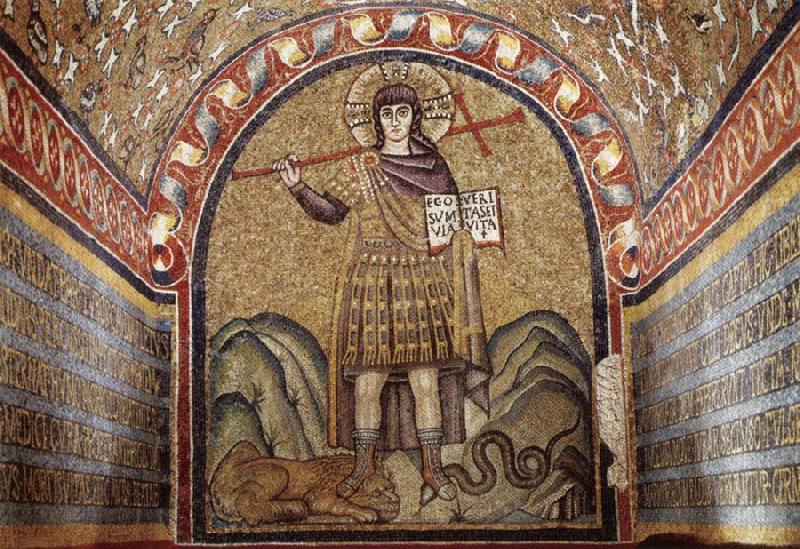 This unconventional sixth-century image of Christ, in which he is represented as an ancient military figure such as a general or emperor, is a mosaic on the walls of the Archbishop’s Chapel in Ravenna, Italy.  Rich with symbolism, this image shows Christ treading simultaneously on a snake and a lion and holding a book in which is written the Latin words “ego sum via, veritas et vita” or “I am the way, the truth, and the life.”  The presence of the lion and the snake is most likely a reference to Psalm 91, in which it is written that the young lion and the serpent would be trampled underfoot, a reference to Christ’s ultimate victory over Satan.  It is interesting to note here the many ways an artist may represent Christ. Considering numerous representations of Christ in art, from the Good Shepherd to the Miracle Worker to Christ Militant as depicted here, is a thought-provoking and prayerful way to call to mind the many facets of the humanity and divinity of God. 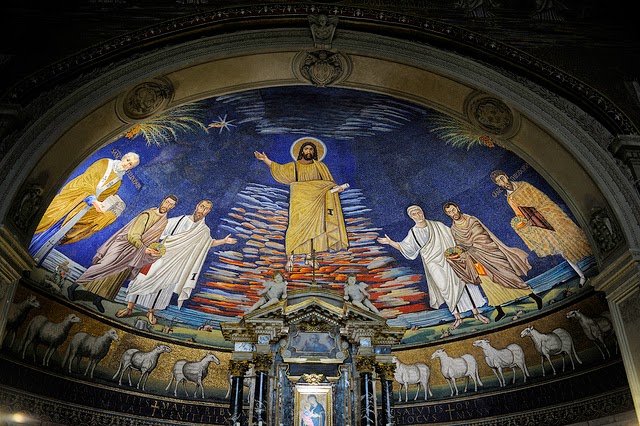 This beautiful mosaic of the risen Christ lies in the Church of Saints Cosmas and Damian in Rome.  The building, incorporated into the ancient Roman Forum, became a church in the year 527.  Within it lie well-renowned works of art that are considered masterpieces of the 6th and 7th centuries.  This particular mosaic depicts Christ with Saints Peter and Paul on either side.  Saint Peter, on Christ’s right, presents Saints Cosmas and Theodorus, and Saint Paul on Christ’s left presents Saints Damian and Pope Felix IV, who was pope at the time of the church’s dedication.  This image is notable for presenting a somewhat exotic portrayal of Christ and his surroundings, considering the vibrancy of the colors and presence of palms (also recalling Christ’s entry into Jerusalem on Palm Sunday).  The flock of lambs at his feet indicate Christ’s reign over and love for his Church. 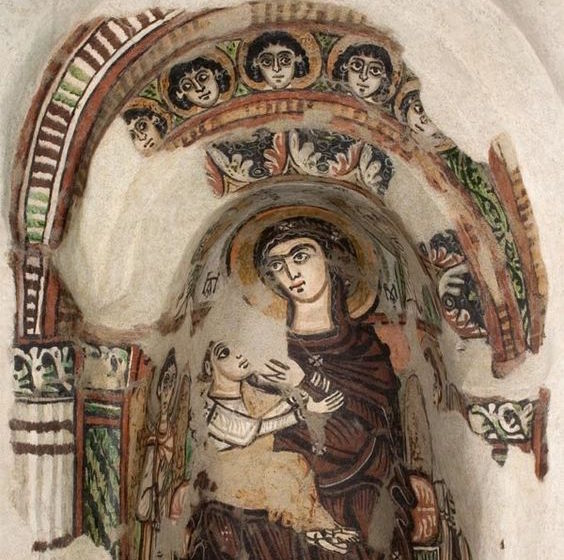 This painting of the Madonna and Child originated in Saqqara, Egypt.  Images like this one were painted throughout the Monastery of St. Jeremiah in Saqqara on eastern walls, and these painted niches were intended for the purpose of aiding the monks in their prayer and contemplation.  This image has become a familiar one to Catholics, but as this image dates to either the sixth or seventh centuries, it was one of the first to portray the Child Jesus in this way with his mother.  We see, despite the absence of certain places of the fresco, that Christ holds his mother with both hands, showing his gentle nature and the immediacy of his relationship to Mary.  Seeing the closeness of mother and son here allows us to contemplate the way in which we can more easily grow closer to Jesus: through his mother, whom He loved so greatly.

In Santa Costanza, a church in Rome that was built in the fourth century, lies a mosaic of Christ and Saint Peter, who approaches Christ in apparent supplication.  This image is one of the first to depict Christ in this way: he is seated as a king or emperor, attired in royal and exotic raiment, and he is seen giving Saint Peter the keys to his heavenly kingdom.  With Christ seated on a sphere, a ready symbol of the world, we can see that this image is intended to describe Christ’s passing of his authority on the earth to man.  The theme of Christ giving man the ability to govern on earth is a theme reflected throughout some of the other mosaics in Santa Costanza, which were constructed some time between the fifth and seventh centuries.  An image of Christ in a separate apse shows Christ giving the scroll of the law to Peter and Paul.  These mosaics call to mind Christ’s supreme power and kingship, causing the viewer to consider his humble position as a member of the Body of Christ.

What is your favorite image of Christ? Share in the comments!