Il Poverello: The Radical Life and Conversion of St. Francis of Assisi

The image that many conjure when they think of St. Francis of Assisi might seem like a 13th-century caricature. I'll admit, I thought of him as the original hippie environmentalist with his bare feet and robe, surrounded by woodland creatures.

Any good Catholic family has a St. Francis bird feeder and remembers to take their pets to the church for a blessing on his feast day. But who is this funny little man whom even Snow White might be a little envious (isn’t there a story about him singing to the birds?).

Francis was born to a wealthy family in Assisi, Italy. His father was a wealthy silk merchant who gave Francis a life of luxury and possessions. Francis was a high-spirited character. He was handsome and witty, shrouded in bright clothing and loved music and singing.

He was very popular among the young people in Assisi and was often prone to vanity. His family was Catholic but didn’t exercise the faith actively in the home or outside of Sunday Mass.  He was expected to follow his father into the textile business.

His greatest desire was to become a knight. He bought a beautiful, expensive suite of armor and eagerly awaited his first battle, despite never having been trained in combat. However, during his first military expedition against Perugia, he was imprisoned for ransom and spent a year in captivity. His captors knew that they could get a nice sum for him after seeing him in the battlefield with his suite.

While he was captured, Francis fell seriously ill and began to see the emptiness of his worldly, carefree lifestyle. His youthful body weakened and many historians suspect that he never fully recovered physically. After his father paid the ransom, Francis was released and entered a life of prayer and self-emptying, desiring to imitate the life of Christ. Much to the dismay of his family, he began giving away many of the beautiful clothing and goods that had previously given him a false sense of joy.

One day, while praying in the neglected field-chapel of San Damiano, Francis heard Christ calling from the crucifix “Francis, go out and build up my house, for it is nearly falling down.” Taking the call literally, Francis began repairing the material building by selling many of his clothes and goods for stones and tools. However, Christ’s message referred to the whole of the universal Church.

His father was livid. He sought to have the bishop of the diocese talk some sense into Francis and demand that he return the possessions given to him by the family. In the public square, they confronted Francis who renounced his father and his patrimony. He gave everything back, down to the clothes he was wearing and the bishop covered him with his own cloak. Quite literally, Franics was now at the mercy of the Church to provide for him all his worldly needs.

His Founding of the Franciscans

After the dramatic public ordeal, Francis wondered as a beggar in the hills of Assisi. During this time, he adopted the token habit and staff of a pilgrim. He begged for materials to continue the restoration of San Damiano and rebuilt it with his own hands. In all, 12 men agreed to follow his way of life, plus countless others who sought him to hear him preach.

By his example and preaching, people were inspired by his poverty and began following him. It inspired St. Clare who, like Francis, abandoned wealth to live a life of poverty and virginity as Christ did. She went on to form the order of the Poor Clares, dedicated to living the life that Francis preached.

As he traveled the hills of Italy, Francis earned the nicknames, “God’s fool” and "il Poverello" (the little poor one). He preached upwards of five times a day reminding the body of Christ of the gospel and God’s love for them.

He saw nature as the perfect mirror of God. He called all creatures his “brothers and sisters,” even the birds, sun and moon. He was even seen preaching to the birds in the trees about the beauty of creation.

His Later Life and Death 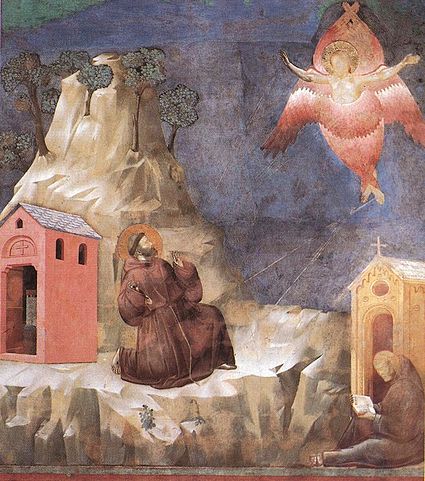 On the Feast of the Exaltation of the Cross In 1224, while praying on the mountain of Verna, Francis received a vision of a seraph, a six-winged angel on a cross, that left him with the stigmata -- marks resembling the wounds of Christ’s crucifixion. They never healed, staying with him until his death in 1226.

He was pronounced a saint by Pope Gregory XI  in 1228 who laid the foundation stone for the Basilica of St. Francis of Assisi.

When Francis died, the Franciscan order lived on. Throughout history, Franciscans have been sent on pilgrimages throughout the world to bring its people to Christ. They were sent to the Americas, where many of his followers founded missions in what is now the Southwestern states and California. Cities like San Francisco, Los Angeles and San Antonio were named in honor of this saint, his devotion and one of his beloved followers, St. Anthony.

He earned a reputation among the Muslims as a peaceful preacher. Only the Franciscans were allowed to remain in the Holy Land as custodians when the Muslim conquest of the region occurred until Christians pilgrims were welcome again. The Franciscans still maintain and upkeep holy sites where Jesus lived.

St. Francis created the first known nativity scene, using real animals and people so worshipers could contemplate the birth of Christ. And now every Christmas, our homes are adorned with beautiful nativity scenes.

In 2013, the Jesuit cardinal, Jorge Bergoglio chose Francis as his papal name in honor of St. Francis of Assisi. Many speculated that Bergoglio chose the name Francis after Francis Xavier, but the new pontiff confirmed that he chose the name after Francis of Assisi. At his first media audience, Pope Francis said of Saint Francis of Assisi: “He is the man of poverty, the man of peace, the man who loves and protects creation; these days we do not have a very good relationship with creation, do we? He is the man who gives us this spirit of peace, the poor man … How I would like a Church which is poor and for the poor!”

And of course lastly, St. Francis of Assis penned many beautiful prayers which we still recite today, including the Prayer Before the Crucifix:

enlighten the darkness of my heart

Lord, that I may carry out

Your holy and true command.

St. Francis of Assisi, pray for us.