Juan Diego, God’s Instrument of Love to the Mexican People

As we approach the Feast Day of Juan Diego and of Our Lady of Guadalupe, we remember the “simple, humble Indian” to whom the Blessed Mother appeared, sparking a new vitality of faith among the Mexican people. On December 9, 1531, our Lord sent His tender and compassionate Mother to speak a message of love and belonging to the Mexican people. To reach the people’s hearts, Mary appeared with a mestizo face, showing that she was their Mother too. As Christ “became flesh and dwelt among us” (Jn 1:14)  in the Incarnation, Mary, the model for us all, became like the Mexican people in order to draw them to Christ. In doing so, she revealed the intimacy that Christ desires to have with His children. All peoples of all ethnic groups belong in the family of Christ.

Who was Juan Diego? 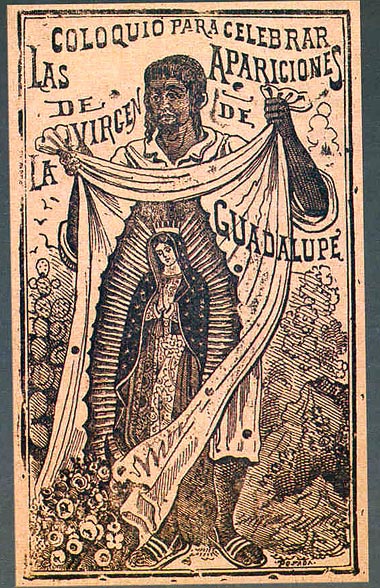 Juan Diego was a poor, humble Indian who loved Jesus and His Church. He was born around 1474 in the village of Cuautitlan and was named Cuauhtlatoatzin, which means “the talking eagle”. He was a farmer and textile manufacturer while he cared for his household of wife and children. During this time, the Spanish Conquest of 1521 occurred. This was a time of desolation and great loss of identity for the indigenous people. Before the conquest, the indigenous people worshipped false gods and offered human sacrifices. Juan Diego may have been involved with this idolatry until his conversion. Around 1524, he and his wife, Maria Lucia, became Christians and were baptized by the Franciscan missionary Friar Toribio de Benavente. He lived a quiet, obedient life to the Lord with his family and later, after the apparition, as a hermit. 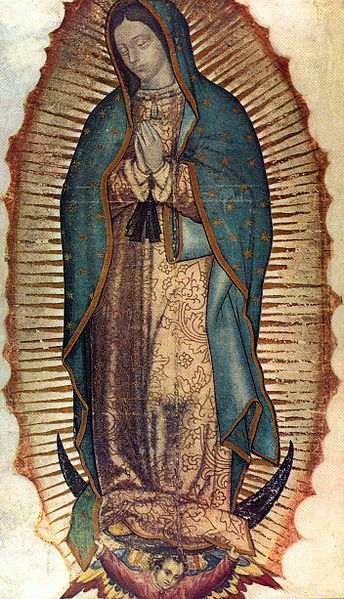 In the cold mountain air of December 9, 1531, Juan Diego set out for Mass as he did every Saturday and Sunday. It was 24 miles from his town to the church, but he was dedicated to our Lord and made the journey not once, but twice a week. On this particular day, as he approached Tepeyac hill, he heard music that sounded like a symphony of birds and then, to his utter delight and surprise, he heard his name in his own Nahuatl tongue: “Juantzin, Juan Diegotzin”.  He climbed further up the hill and discovered the dazzling beauty of the Blessed Mother herself. She appeared to him with a mestizo face like his own.

As the angel Gabriel delivered a message of great joy and deliverance to the humble and obedient Mary, our Mother spoke a message of comfort and joy to Juan Diego. This servant of God responded in a very similar way to the Blessed Mother: trusting in the Lord’s providence and having the courage to carry out His will.

In her message, Mary revealed herself as the true Mother of God, setting herself apart from the false goddesses of the Indian culture and establishing our Lord as the one, true God among the false gods. She asked him to build her a church to worship the one true God on that very hill. In light of the suffering of the Mexican people due to the Spanish Conquest, Mary offered comfort to all the Mexican people with her motherly tenderness, protection, and healing touch.

She spoke these words to Juan Diego as he himself suffered with his dying uncle:

“Listen and let it penetrate your heart…do not be troubled or weighed down with grief. Do not fear any illness or vexation, anxiety or pain.  Am I not here who am your Mother? Are you not under my shadow and protection? Am I not your fountain of life? Are you not in the folds of my mantle? In the crossing of my arms? Is there anything else you need?”

After encountering the Mother of Christ, Juan Diego knew that he had to tell his story to the Bishop. It took three visits and a sign to convince the Bishop to let him build the church on Tepeyac hill. For the sign, Mary presented Juan Diego with a bundle of red roses. As he showed the roses to the Bishop, the image of Our Lady of our Lady appeared on his tilma, the image that is so precious to the Mexican people today.

Life after the Apparition 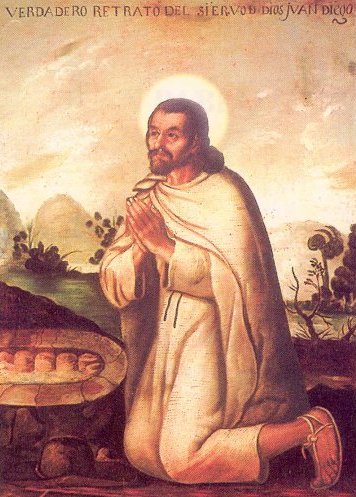 Though Juan Diego had experienced a conversion six years prior, this encounter with Our Mother inspired a deeper love and devotion to Our Lord. He discovered that he, too, as an indigenous Indian man, was a child of God.  In the years following, he lived as a hermit at the base of Tepeyac hill. The “apostle to the apostles”, our Blessed Mother, appeared to him and inspired this deeper love in him, making him the “apostle to Mexico”. As a result of his own transformation, the people of Mexico were also inspired to turn back toward God. They experienced a renewed vitality of faith. Juan Diego’s encounter with Our Lady inspired the people to return to the God who created them.

In seven years, as the Protestant reformation raged in Europe, eight million indigenous peoples of Mexico repented and converted to the Catholic Church, they stopped human sacrifice, and they made amends with their Spanish conquerors.

Because Our Lady had appeared with the face and voice of the Mexican people, she became a “model of perfectly inculturated evangelization” (John Paul II). Through His Mother, Christ used the elements of Indian culture and redeemed them. This encounter led to a new Mexican identity, one defined as being children of the Blessed Mother of Christ. The Indians learned to appreciate their culture’s traditions and values and reestablished brotherhood amongst their own people.

Why did it take so long for Juan Diego to be canonized?

Although the apparitions of Our Lady of Guadalupe occurred in 1531, Juan Diego was not canonized until 2002, over 400 years later! One reason was that his identity was questioned by an abbott, who suggested that the Vatican hold off his canonization. To confirm his existence and encounter with Our Lady, a Vatican historical commission investigated the Spanish and indigenous sources on Juan Diego in both Mexico and in the Vatican archives. They discovered that all of the documents agreed on the basic facts about the encounter and Juan Diego’s existence.

Another reason for his late canonization was that the final miracle required for sainthood did not occur until 1990. On a morning in May, a young man named Barragán tried to commit suicide by stabbing himself with a knife and jumping off of a balcony. His mother prayed to Juan Diego for protection and proof that Our Mother was watching. He was miraculously cured, and it just so happened that his fall occurred on the same day as Juan Diego’s beatification! This miracle showed that Juan Diego was a servant of God whose mission was to proclaim His love to the Mexican people.

A Model of Humility

In choosing to appear to a simple, humble man in the hills of Mexico, Christ, through His Mother, showed the world that God sees the hearts of the humble and exalts the lowly. “For though the LORD is high, he regards the lowly, but the haughty he knows from afar.” (Ps. 138:6).

God desires for all of us to know His deep, penetrable, unconditional love, and He often chooses the humblest, lowliest of us all to spread His message to the world. He is the God of all people and desires all to be His children.