My Top 5 Favorite US Catholic Shrines

In our recent blog posts, you may have noticed a link to download the "Ultimate List of U.S. Catholic Shrines." This e-book is an amazing resource on shrines located throughout the United States. Since this e-book is free to download, I thought that I would share with you this week my five favorite shrines from the list. These locations are in no particular order and are probably my favorite because I have had the opportunity to visit them. When you are done reading this week's blog, don't forget to get the full list of shrines for yourself!

"Located within St. Dominic Catholic Church in San Francisco, California, the Shrine of St. Jude Thaddeus was founded by Dominican priest, Fr. Leonard Callahan, in 1935. The purpose of this beautiful shrine is to renew hope in St. Jude devotees, particularly through mail. Many people ask for St. Jude’s intercession by submitting prayer requests to the Dominicans who maintain the shrine, and, of course, the shrine receives regular pilgrims who wish to pay homage and thanksgiving to the “saint of impossible cases.” The tower was destroyed in 1989 by Earthquake Loma Prieta, but the main church was miraculously untouched, many believe due to the intercession of St. Jude." Quote from the "Ultimate List of U.S. Catholic Shrines."

St. Dominic's Church (and the shrine inside) is a beautiful church with a lot to look at and reflect on. I was able to take some teens from my youth group here last year and we were all so amazed at the feel of this shrine. We were all able to purchase a little bottle of St. Jude Blessed Oil, which was blessed with a relic of St. Jude. Since St. Jude is also the patron saint of "impossible or lost causes" we each were able to light a candle at the shrine and pray for something that we felt was a cause that needed prayer. California also has many amazing Spanish missions that are worth visiting too, but this is one gem that you should see if you're ever in the San Francisco area.

"In 1909 -1910, Mother Cabrini purchased land in Golden to be used as a summer camp for her charges at the Queen of Heaven Orphanage in Denver, Colorado. All of the water needed for both drinking and cooking had to be brought up from the stream at the bottom of the canyon. In September 1912, the sisters complained to Mother Cabrini. She answered, “Lift that rock over there and start to dig. You will find water fresh enough to drink and clean enough to wash.” The spring, which is housed in an 8,000 gallon tank, has never stopped running. It also houses a Stairway of Prayer, a grotto, and a convent." Quote from the "Ultimate List of U.S. Catholic Shrines."

This shrine may be on my "bias" list since I live in Colorado and visit this shrine multiple times a year. Mother Cabrini Shrine is located right off the highway that takes you up to the mountains and its views are just amazing. To the east, you can see all of Denver and to the west, you see the majestic Rocky Mountains. This is another shrine that you can take home a piece of history since you can drink from the spring that hasn't stopped flowing since 1912 when Mother Cabrini performed the miracle. It's rare that we get the opportunity in the United States to walk where a saint once walked; it really is a powerful place to be. 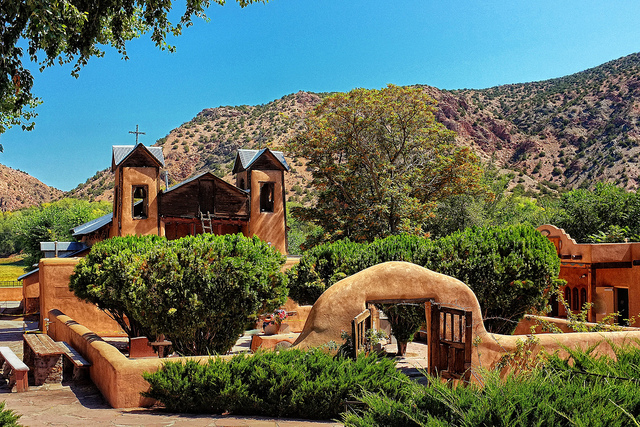 "Nestled in an unpretentious area of the United States, The Shrine of Santo Nino de Atocha was founded in Chimayo, New Mexico following the miraculous recovery of Severiano Medina through devotion to the Holy Infant in the early 1850s. Median, who was part of a well-renowned family. chose his native town of Chimayo to found a shrine in honor of the Holy Infant, as a sign of gratitude for his full recovery to health." Quote from the "Ultimate List of U.S. Catholic Shrines."

This another location that I have taken teens on pilgrimage before and they've just absolutely loved it. It's hard to ignore the rich Catholic history and tradition of the southwest! Not only can you attend Mass in an adobe built church, but you can also find some "holy dirt" to take with you. There are been reported cases of healing miracles after people have traveled to this site, so there is obviously something very special about it! There is a very powerful image in the shrine of abandoned canes, crutches, and other assisting devices as evidence that healing has taken place. During Holy Week, many people flock to this site and make the 27 mile walk on foot from Santa Fe as part of their remembrance of the events during Holy Week. New Mexico has many other missions to visit as well, so take some time to pray at one the next time you are there!

4. New York - National Shrine & Basilica of Our Lady of Victory 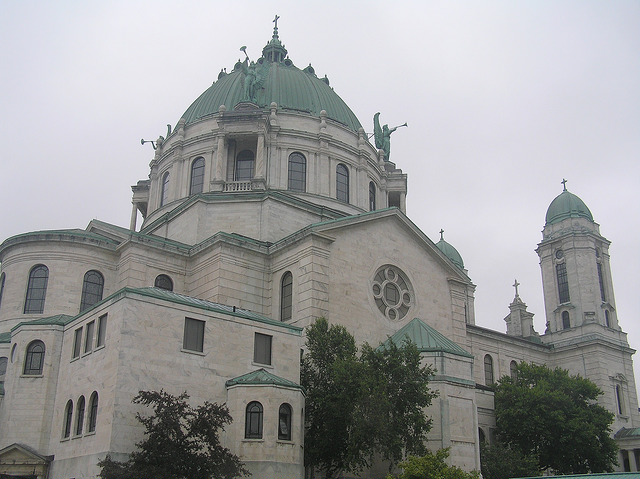 "As part of the diocese of Buffalo, New York, The National Shrine and Basilica of Our Lady of Victory is a thriving Catholic community that includes an elementary school, a museum, a gift shop, and of course, a basilica. Based on the many charities of its founder, Fr. Nelson Baker, the shrine has become a popular place of worship and prayer. Originally a simple parish named St. Patrick’s, the basilica was built after a horrific fire destroyed the original church in 1916, where Fr. Baker was pastor. During the inauguration of the basilica’s dedication in 1925, thousands of priests and religious flocked to the event, which included a consecration to Our Lady of Victory. The basilica itself – and its history – is one of the foremost attractions to this shrine." Quote from the "Ultimate List of U.S. Catholic Shrines."

Inside and out, this shrine is really quite breathtaking. The focal point inside is the nine-foot marble statue of the Blessed Mother placed above the altar and was blessed by Pope Pius XI before being sent to New York. Throughout the church are many more reminders of Mary's life and her importance to our faith. There are also somewhere between 1,500 to 2,500 angels depicted in the basilica; the goal of having angels in every possible sightline was important when creating the space and it's obvious they achieved that goal when looking around. In 1926 he basilica was dedicated to Our of Victory and has been an important place for pilgrims from all over the country since. 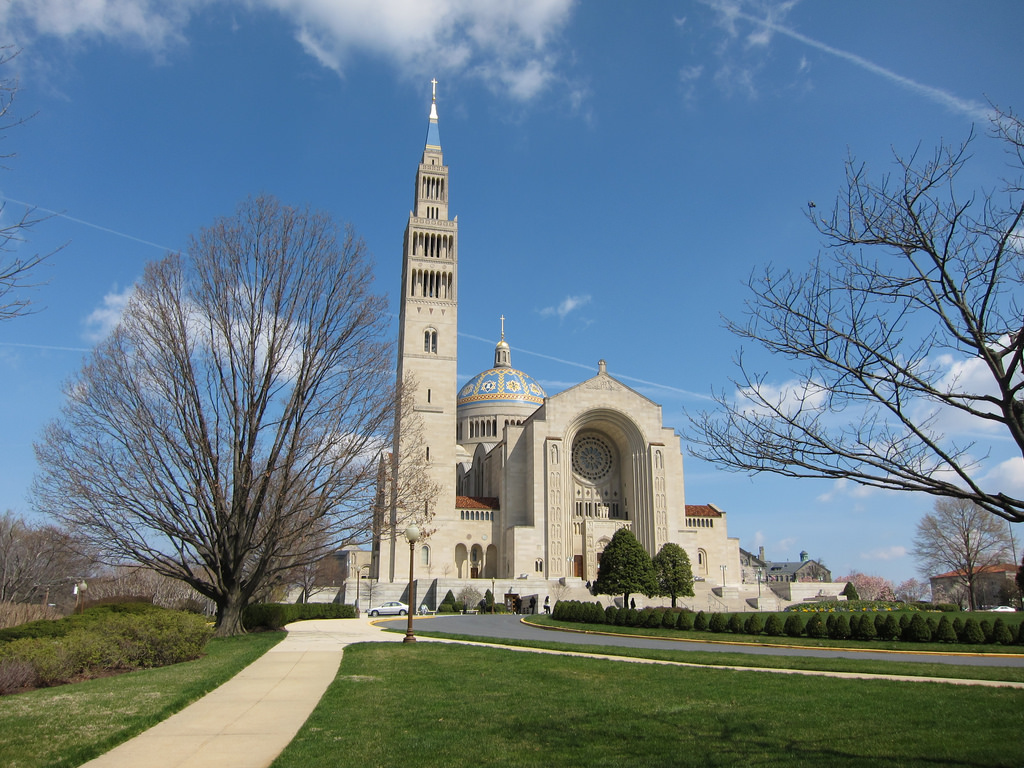 "Responding to the call to engage in the new evangelization made by Popes John Paul II, Benedict XVI, and Francis this shrine is primarily a place of worship. But it is so much more than that. One of the highlights of a visit to this shrine is the chance to venerate a first class relic of St. Pope John Paul the Great--a vial of the saints blood donated by Cardinal Dziwisz the current Archbishop of Krakow and former secretary to Saint John Paul II when he was pope. But there are more than the one chapel in this shrine. In addition to the relic and beautiful chapels, the shrine has an extensive permanent exhibit on the life of Pope John Paul II." Quote from the "Ultimate List of U.S. Catholic Shrines."

I actually haven't visited this shrine yet, but it probably is number one on the list of shrines I need to visit next. It's hard to deny the impact that John Paul II had (and continues to have) on the Church, and we are privileged to have one of his first class relics here in the United States. Washington D.C. is just so full of history that it's great to have a shrine dedicated to a modern pope and saint amongst the many other memorials and museums. The shrine has done a great job of incorporating technology into the exhibit so that generations to come are able to learn more about their faith and John Paul II's contributions to it. Each person that goes through the exhibit goes on a special faith formation journey and leaves feeling more empowered to continue the New Evangelization that John Paull taught. What better place to learn and pray than in our nation's capital?