The Beauty and Importance of the Four Major Basilicas

August 5th is the Feast of the Dedication of the Basilica of St. Mary Major. This feast has a long history, being raised to the status of a universal feast by Pope Pius V in the sixteenth century. The Basilica of St. Mary Major was first built in the fourth century by Pope Liberius, and was thus called the Liberian Basilica. The name was later changed to the Basilica of St. Mary by Pope Sixtus III after the Council of Ephesus. The Council of Ephesus was convened in the context of the Nestorian Heresy, which claimed that Mary was the mother of Christ’s human nature, but not the mother of Him as a person and thus not the mother of God. The council declared that Mary is, in fact, the mother of God or Theotokos. It was in commemoration of this great event that Pope Sixtus III changed the name of the basilica to honor Our Lady. In the seventh century, the basilica began to be called St. Mary of the Crib because it contained several pieces of wood that were supposedly part of Our Lord’s crib. However, it is doubtful that these relics are authentic. Finally, the basilica acquired the name St. Mary of the Snow due to a most likely legendary account of the origin of the basilica. According to the legend, there was a wealthy and childless Roman couple who desired to use their wealth in the service of Our Lady. They asked Mary in prayer for guidance in how to dispose of their fortune, and in response she caused snow to fall during the night of August 5th onto the Esquiline Hill where the basilica was later constructed. Although this story is not likely true, to this day white rose petals are dropped from the ceiling of the basilica on the feast of its dedication. 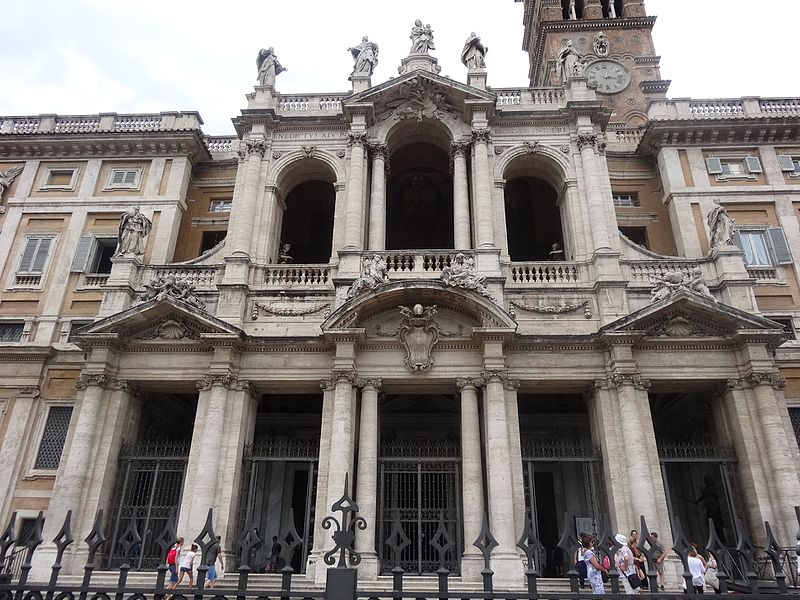 The dedication of a church is typically only celebrated by the local community. For example, a diocese may celebrate the dedication of its cathedral or a Catholic college may celebrate the dedication of its chapel. Originally, the feast of the dedication of St. Mary Major was only celebrated locally, but began to be celebrated by the universal church in the sixth century. This feast, along with the feasts of the other major Roman basilicas, unites the universal church to Rome as our spiritual mother and emphasizes that these major basilicas belong to the whole world. The feast of St. Mary Major also especially exalts Our Lady and her status as the Mother of God. We should use the occasion of these feasts to celebrate the beautiful reality of our faith and the remarkable fact that it has endured for millennia throughout the whole world. The Catholic faith is the gift that God has given to the world for its salvation, and the Roman basilicas embody this fact in a concrete way. These feasts are an opportunity to pray for the pope and his intentions and to thank God for giving us the gift of faith.

The Basilica of St. John Lateran 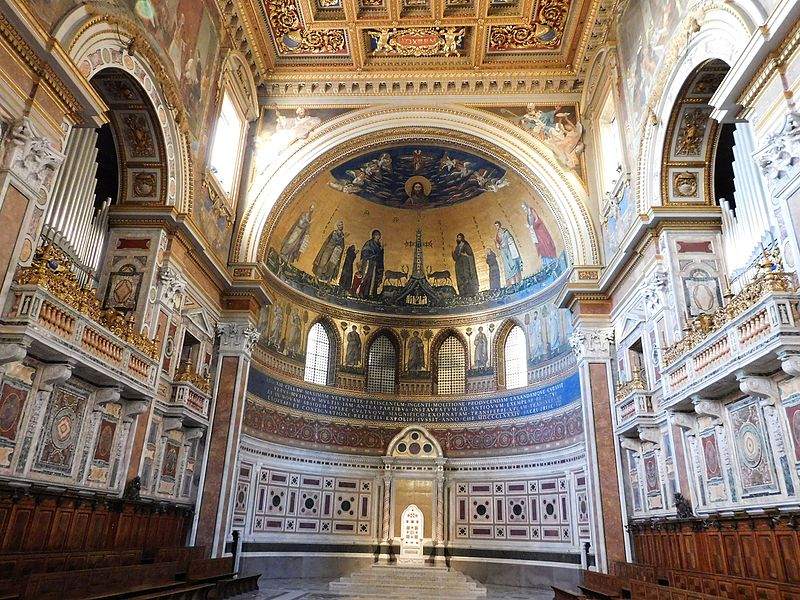 The Archbasilica of St. John Lateran is the cathedral of the diocese of Rome, and thus is the seat of the pope, who is the bishop of Rome. This cathedral was originally built in the fourth century, and has since been damaged or destroyed and rebuilt many times. It is situated on the former site of the palace of the Laterani family, which was acquired by the Emperor Constantine who then gave it to the Church in the fourth century. Since that time, the basilica was the cathedral of Rome and the residence of the popes until they moved to the Vatican following their return from Avignon, France. However, the Lateran Basilica remains the cathedral of Rome and the church of the pope. Thus, it is called “Omnium urbis et orbis ecclesiarum mater, et caput,” or the “mother and head of all churches in the city and the world.” Its current appearance dates from the late sixteenth century by the architects Borromini and Galilei. It no longer retains the original appearance typical of the architecture of a basilica, a form of building predating Christianity. However, some of the original elements remain, including mosaics dating from the fourth century. The main altar of this basilica is believed to be the altar upon which St. Peter celebrated mass in Rome, and is now encased in marble, and the beautiful baldacchino above the altar contains the heads of Sts. Peter and Paul. The nearby baptistery is believed to be the original building built by the Emperor Constantine. The baptistery has since been decorated and improved upon by various popes, having a beautifully colored floor, red porphyry columns, and a high, golden ceiling. 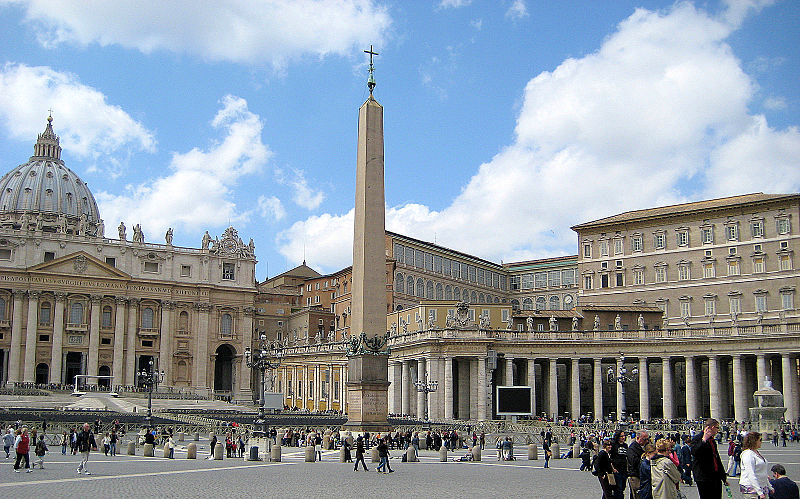 The construction of St. Peter’s Basilica, for a long time the largest church in the world, began in the early sixteenth century and ended in 1626, when it was dedicated by Pope Urban VIII. However, the current church was predated by over a millennium by a basilica built by the Emperor Constantine beginning in the year 323. This basilica was richly adorned through the contributions of the faithful, and endured for twelve centuries. After the return of the Papacy from Avignon, Pope Nicholas V decided to destroy the old basilica and construct a new one. Major progress only began later under Julius II, who opened a competition to various architects to determine the plans for the new basilica. The design of Bramante prevailed, who proposed that the new building be in the form of a Greek cross, all four arms being of the same length, with a large dome. Later architects proposed significant alterations to this design, but Michelangelo, who took charge of the construction, intended to preserve much of the original plan including the Greek cross shape. However, he equipped the building for a larger dome. The Nave was lengthened into the form of a Latin cross, but the dome itself faithfully reflects Michelangelo’s intentions. St. Peter’s is filled with a vast quantity of fine art, from the enormous statues of the saints to the ornate golden ceilings and colorful stone walls and floor. Many side chapels and tombs line either side of the nave, such that fully appreciating all that there is to see in the basilica would take many days. Perhaps the most impressive sights are Bernini’s bronze baldacchino over the center altar and the bronze and gold encasement of the chair of St. Peter with fifteen foot high statues of Doctors of the Church and an alabaster window of the Holy Spirit in the form of a dove. Visiting St. Peter’s Basilica is truly a sublime experience.

The Basilica of St. Paul Outside the Walls 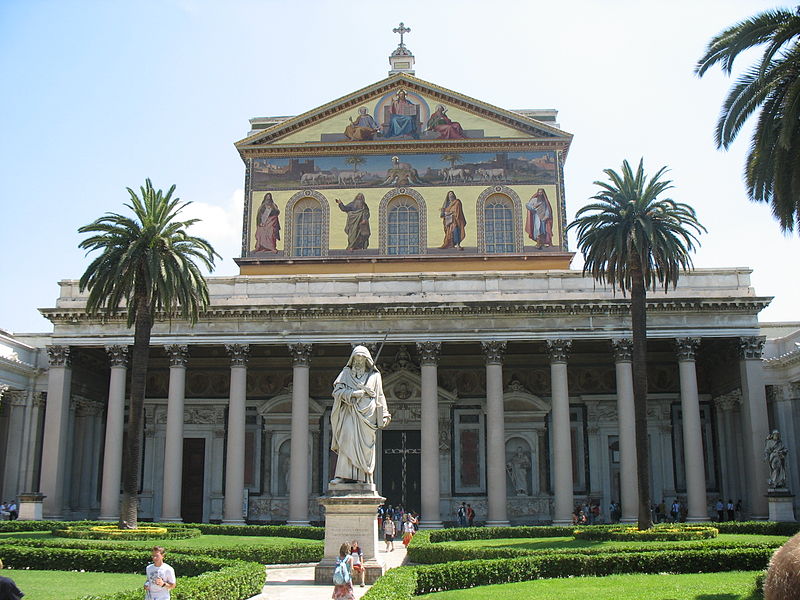 The Basilica of St. Paul Outside the Walls, built over the burial place of St. Paul, was originally constructed by the Emperor Constantine and expanded upon in the fourth century by the Emperor Theodosius. While various works of art had been added after this, the basilica stood in its ancient form until the nineteenth century when it was destroyed by a fire. The basilica was rebuilt identically to its original form. Notable in this basilica is the series of mosaic portraits of every pope from St. Peter to this day and a large mosaic of Christ and the Apostles in the apse from the thirteenth century. In front of the church is a simple but beautiful courtyard surrounded by colonnades and containing a large statue of St. Paul. Also, a Benedictine abbey is part of the same complex, which has housed a community since the eighth century. As with the other major basilicas, the complex of St. Paul Outside the Walls is under the authority of the Pope and administered by his representative.

These four basilicas are the principle churches of Christendom, representing the unity of the faithful and the millennia of devotion, art, and history that permeate the long life of the Church. An opportunity to visit them in person or at least to study and view pictures of them online is well worth taking advantage of, and will likely increase one’s devotion to the Church, the pope, and the great saints of centuries past.