The Extraordinary Life of St. Faustina

Saint Maria Faustina Kowalska was born on August 25, 1905 in central Poland, the third of the ten children of Stanisław Kowalski and Marianna Kowalska.  She was baptized with the name Helena Kowalska in their parish church.  Although her father was only a carpenter and her family was poor, they were notably religious and devoted to their faith.  This religious fervor spread to Helena quickly, as she was known from an early age for her obedience, prayerfulness and sympathy for those in need.  She received her First Holy Communion at the age of nine, and did so with a remarkably understanding and profound spirit.  She would carry this love of the Eucharist with her throughout her life.

Although Helena felt the callings of a religious vocation after completing her few years at school, her parents would not permit her to enter a convent at her young age.  She instead left home at sixteen and began work as a housekeeper in Aleksandrów, Poland, in order to find a means of supporting both herself and her family.  However, this would not be God’s plan for her life for long: in August 1925, she had a vision of what she described as “a suffering Jesus” who spoke to her asking her to join a convent.  Helena boarded a train to Warsaw, a city nearly a hundred miles away, without telling anyone.  In Warsaw, she was rejected by several convents due to her poverty, but finally found a home in the Congregation of the Sisters of Our Lady of Mercy.  This convent accepted her provisionally, asking that she first be able to pay for her religious habit.  Helena then worked and deposited money regularly at this convent until she gained acceptance in 1926.

Helena joyfully received her habit at the age of twenty on April 30, 1926, taking the name Sister Maria Faustina of the Blessed Sacrament.  She professed her initial vows two years later with her parents present.  Throughout her time with the Sisters of Our Lady of Mercy, she was transferred numerous times to different parts of Poland, working as a cook, gardener and porter. Faustina lived a seemingly ordinary life, though she worked and prayed with great peace, faith, kindness and obedience. She would eventually take her final vows on May 1, 1933, becoming a perpetual sister of Our Lady of Mercy. 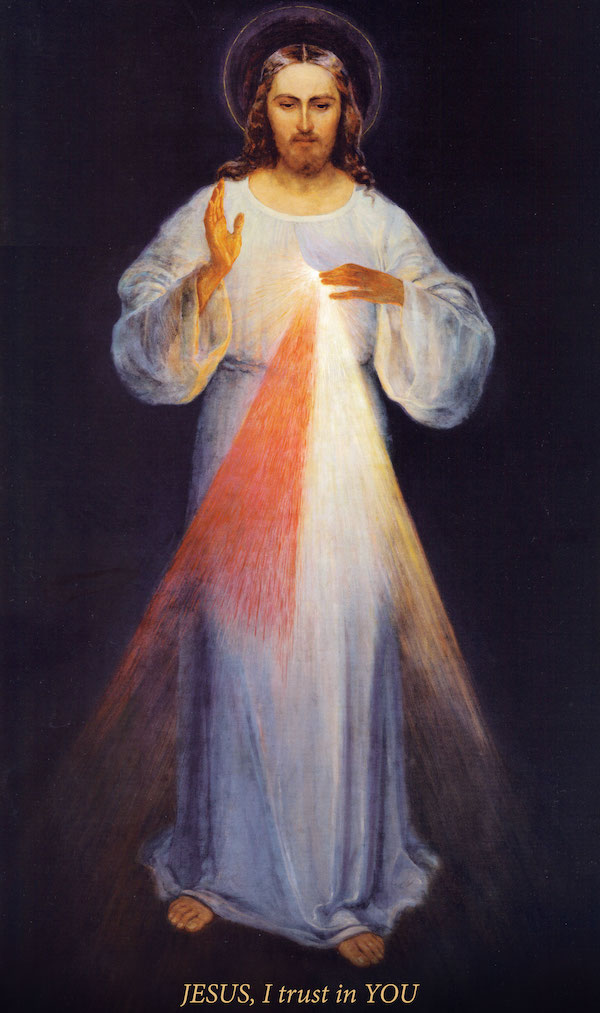 In 1930, while Faustina resided in Płock, an illness (thought later to be tuberculosis) began to manifest itself.  She recovered after some time of rest, and it was then that she received a vision of Jesus as the “King of Divine Mercy,” clothed in white with red and white rays radiating from his heart.  In this vision, Jesus asked her to paint an image of himself as he had appeared to her, with the words “Jesus, I Trust in You” inscribed upon the painting.  He expressed a desire for the worldwide veneration of this image, and promised special help and graces to those who gave it this veneration, saying “I promise that the soul that will venerate this image will not perish. I also promise victory over [its] enemies already here on earth, especially at the hour of death. I Myself will defend it as My own glory” (The Diary of Saint Maria Faustina Kowalska, item 48).

In 1933, Faustina met Father Michael Sopoćko, who was a confessor to the sisters.  In her confessions with Father Sopoćko, Faustina discussed her conversations with Jesus and indicated that she was carrying out his plan in her life.  At this time, Father Sopoćko asked that Faustina undergo a complete psychiatric evaluation to in order to discern whether her visions and conversations with Jesus could be true.  After these evaluations, Faustina was declared of sound mental health, and Father Sopoćko began to have confidence in her efforts to spread the devotion of Divine Mercy.  He introduced her to Eugene Kazimierowski, an artist, who completed a painting of Jesus, the King of Mercy, under Faustina’s direction.  Jesus had asked that the painting be blessed on the Sunday after Easter, and that that Sunday be designated as the Feast of Divine Mercy.  This painting, after its completion in 1934, was venerated on the Sunday after Easter in 1935, according to Jesus’ request.

During this time, at the suggestion of Father Sopoćko, Faustina had begun to record her conversations and visions of Jesus in a diary.  She would continue respecting her confessor’s wish until her death, writing hundreds of pages based upon her experiences.  Within these years of keeping her diary, Faustina continued to have visions of Jesus, who made known the importance of honoring and trusting in his mercy.  In one of her visions at this time Jesus showed her what is now known as the Chaplet of Divine Mercy, which he instructed her to say and make known for the purposes of obtaining mercy for oneself, for trusting in Jesus’ mercy, and for showing mercy to others.

As Faustina continued her writing and efforts to spread devotion to Divine Mercy, her health again began to plummet.  She was relocated to a medical center in Kraków in 1936.  Despite her failing health and her weakness, she continued to have remarkable zeal for the message of Divine Mercy.  In this time, she continued to pray the Chaplet, as well as a Novena of Divine Mercy which she had received in a vision in 1937.  Over the course of her mystical experiences as a nun, she had experienced many revelations and visions, stigmata, bilocation and had received the gift of prophecy (even prophesying World War II).  Her mysticism intensified in these later years of her life as her health declined.  Father Sopoćko visited her in 1938, saying that she was very ill yet in ecstasy as she prayed.

Faustina died a holy death on October 5, 1938.  She was buried two days later and now rests at the Basilica of Divine Mercy in Kraków, Poland.

After her death, it remained apparent that Faustina had lived an extraordinary Catholic life, and so it was deemed her cause for canonization ought to be investigated.  In 1965, Pope Saint John Paul II (then Archbishop Karol Wojtyła of Kraków) opened the initial investigative process.  Two years later, after researching her life, virtues and writings as well as speaking to witnesses, he submitted documentation requesting the start of the process of beatification. The miracle leading to her beatification involved a woman named Maureen Digan, who reported a cure of her invasive lymphedema after praying at the tomb of Faustina in 1981.  Five physicians reported no medical reason for her cure, and twenty additional witnesses to her prior condition confirmed the miraculous nature of this cure.  Faustina was beatified in 1993 and canonized in 2000 by Pope Saint John Paul II.

Devotion to Divine Mercy continues to this day.  Faustina, during her life, focused on three missions involving the spread of Divine Mercy throughout the world: that everyone recognize the Scriptural truth of God’s merciful love, that new forms of devotion be practiced (including reciting the Chaplet of Divine Mercy, venerating the image that Faustina saw in her vision and celebrating the Feast of Divine Mercy), and that Christians undertake the proclamation and explanation of God’s mercy in the Christian life.  These three missions have been carried out by associations, congregations, religious orders, apostolic communities and laypersons alike.  The widespread devotion to Divine Mercy shows us the universal appeal that it has, and shows us that it is something we can each bring into our daily lives.