The Most Amazing Facts About Our Lady of Fatima

In May of 1917, deep into World War I, three little children in rural Portugal claimed to have seen a vision of Mary, the Mother of God.  We are now about to celebrate the 100th Anniversary of an event that Saint Pope John Paul II has credited with saving his life, as well as the upcoming canonization of two of the children. Here are 20 things you should know about Our Lady of Fatima. 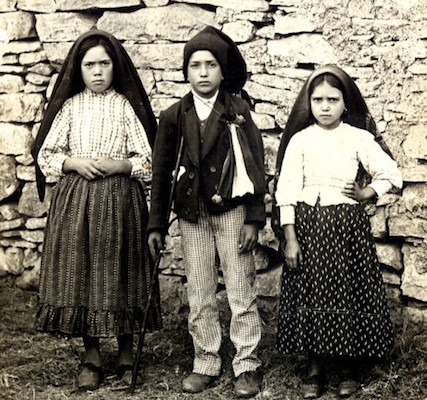 Mary appeared to three children.  Two of them, Francisco and Jacinta Marto, were siblings and the third, Lucia Santos, was their cousin.  In the spring of 1917 the three of them were assigned by their parents to herd sheep near their hometown of Fatima.  It was during these times of herding sheep that the apparitions began.

Mary wasn’t the first apparition to come to the children.  Three times before Mary appeared the children claimed to have seen an angel who identified himself as “The Angel of Peace” told the children to pray, make sacrifices, and to adore the Lord in the Blessed Sacrament.

Mary didn’t just appear once.  The anniversary we will celebrate on May 13 is the anniversary of her first appearance.  She appeared a total of six times to the children over that summer with the final appearance being October 13, 1917.

Jacinta and Francisco’s mother didn’t believe the children when they told her.  She told a neighbor about it as a joke, but that neighbor spread the word about the apparitions of Mary and soon the entire village knew about Mary and the children.

How Our Lady Looked

The children described Mary as brighter than the sun and wearing a white mantle with a gold trim and holding a rosary.  This image would become the basis for the famous statue that would be built.  Many replicas of this statue can be found throughout people’s homes as a devotional today.

After the first apparition, Mary told the children to come back a month later and she would reappear.  Lucia’s mother asked the local priest what she should do.  The priest told her to let Lucia go, but to bring her to him immediately afterwards so he could question her.

At the second apparition in June of 1917, Mary told the children that Francisco and Jacinta would be taken to heaven soon but that Lucia would be around a long time in order to spread the message that she was about to give them.

A Vision of Hell

The Secrets of Fatima

One of the things the children held to very fast and told nobody until Mary gave them permission are what are called the Secrets of Fatima.  Mary told the children three things that they were instructed to keep secret.  These three secrets, especially the third secret, would become the focus of much discussion in the future.

The Day the Sun Danced

Although the secrets of Fatima get most of the attention, there is a documented miracle attached to Fatima that deserves much attention.  At her final apparition, in October of 1917 the sun danced in the sky, reportedly changing colors and rotating.  This was witnessed by over 30,000 people and even reported in the local newspapers.

Over two million people visited Fatima in the next 10 years, which would cement Fatima as one of Catholicism’s biggest pilgrimage sites, and pilgrims have continued to flock to this site ever since.
Francisco and Jacinta died of a flu pandemic that struck Portugal in the next three years.  Lucia would live a full life, dying at the age of 97 in 2005 after living as a nun for most of her life.

Mary gave the children three secrets, which over time have become quite famous.  Mary told the children to keep them secret, but after pressure from other people the children asked Mary for permission to tell the secrets and they were given the permission, except for the third secret which was to be kept a secret.

The first secret was the vision of hell that the children were granted access to by Mary.  After the children saw what hell was like, the emphatically preached the need to pray for souls to avoid what they saw in hell.

In January of 1938 the widest reaching aurora event in almost 250 years occurred and was visible from California to Northern Africa.  The Anschluss of Austria happened a few weeks after this, marking Hitler’s beginning of trying to seize new lands for his empire.

The Vatican, which had the writings of Lucia, did not release the third secret until the year 2000.  The third secret involved seeing a vision of a Bishop in white being killed.  Many have interpreted this vision as the attempted assassination attempt on Pope John Paul II in 1980, although in 2010 Pope Benedict XVI said it did not necessarily refer to this event.

The assassination attempt on Pope John Paul II took place on the feast of Our Lady of Fatima and Saint Pope John Paul II credits her with saving his life after being shot.  One of the bullets that struck the pope was given to the bishop of Fatima and is, still to this day, placed in the crown of the original statue as a gesture of thanksgiving from the Pope to Our Lady.

Canonization of the Three Children

Jacinta and Francisco, the two children who died early, will be canonized as official saints of the church this May when the Pope travels to Fatima to celebrate the 100th anniversary.  Lucia, who lived a full life, is on the road to canonization herself.

What do you know about Our Lady of Fatima? Share in the comments!