The Most Gruesome Details of the Crucifixion of Jesus

If a first-century Roman walked into a Catholic parish today, he’d be shocked to see a crucifix on the wall.  Even more strange would be the artistic adornments on the crucifix—he would only see an instrument of capital punishment.  As we are confronted with Good Friday and Jesus’ Passion, it would help to look at the crucifixion more from the eyes of that first-century Roman than from the eyes of a 21st century person accustomed to crucifixes.  It would help us understand the depths of His suffering, and by extension, the depth of His love for us.  Reflecting on the Passion of Our Lord isn’t just one among many possible devotions.  Jesus recommended to St. Faustina that she should meditate frequently on His sufferings. Jesus endured tremendous physical suffering for us, and won our salvation at great price.

His Passion begins on Holy Thursday.  After the Last Supper, Jesus and the apostles went to the garden of Gethsemane (Luke 22:39-46).  It was there that Judas arranged to have Him arrested (Luke 22:47-48).  St. Luke’s gospel is unique among the four gospels in that it has the trial before the Sanhedrin first thing on the following morning (22:66).  St. Matthew (26:57), St. Mark (14:53), and St. John (18:12) don’t mention any lag in time between Jesus’ arrest and trial.  Regardless of the itinerary, Jesus began Good Friday having spent the night in prison and being mistreated by guards: all after a time of intense prayer, where He was “very sorrowful, even to death.” (Mark 14:34) Part of Jesus’ sufferings that night was to watch as His closest friends abandoned Him. 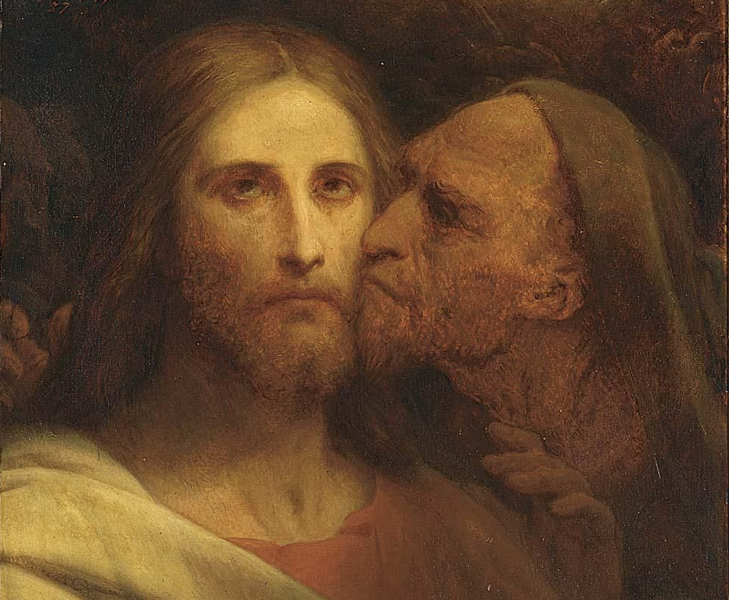 This stage of the Passion is one we can reflect on more easily, I think.  We have all had to carry on after a bad day.  Awful days at work, not sleeping the night before, dealing with health problems, being hurt by a family member or friend, or the death of a loved one.  And let’s remember, for many in prison, their loved ones suffer the absence as well.  It can be very difficult to continue with our daily responsibilities when dealing with some kind of suffering.  Do you ever find it difficult to relate to the Passion of Our Lord?  Remember these trials of this first, preliminary stage of His Passion.  He lived through these things knowing everything that was to happen--including the death he was to endure on the cross (e.g. Mark 9:12; Matt 16:21).

Pontius Pilate and Herod sent Jesus back and forth to one another; the final decision on Jesus’ execution rested with Pilate.  The chief priests and leaders, along with the mob gathered at Pilate’s Praetorium, clamored for it.  As the Jews didn’t have the legal authority to condemn someone to death, they needed Pilate to do so.  Ultimately, Pilate acquiesced to the wishes of the mob and condemned Jesus to death and ordered scourging first (Mark 15:15). 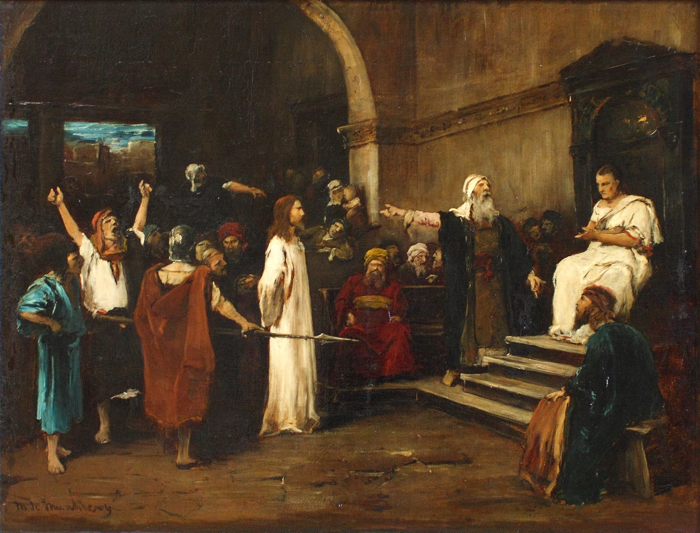 Our Lord is Scourged at the Pillar

The prisoner was tied to a pillar and flogged with sticks and a special whip.  The Romans’ scourging whip “had iron balls tied a few inches from the end of each leather thong on the whip. Sometimes, sharp sheep bones would be tied near the ends.”  The metal weights served to cause serious bruising, or contusions, and the leather of the thongs cut into the skin.  The sheep bones were also made to deepen the lacerations into the skin. After only a few lashes, the depths of the cuts would reach into muscle tissue. Servant of God Cora Evans, an American mystic whose cause for canonization is being considered writes, wrote out her mystical visions of the life of Christ in The Refugee from Heaven. Of the scourging she writes, “as each [stroke] cut across the Master’s torn shoulders, small particles of His Sacred Flesh fell from the knotted leather whip-knots to the pavement, which was now covered with His Precious Blood”(p. 331). According to the visions of Bl. Anne Catherine Emmerich, another mystic author, the Roman soldiers first whipped Jesus’ back and then turned Him around.  They proceeded to whip the front of Him. The physical effects of the beating went far beyond the considerable pain it inflicted—with His flesh torn into on either side, He mus have lost a lot of blood before even getting near the cross. 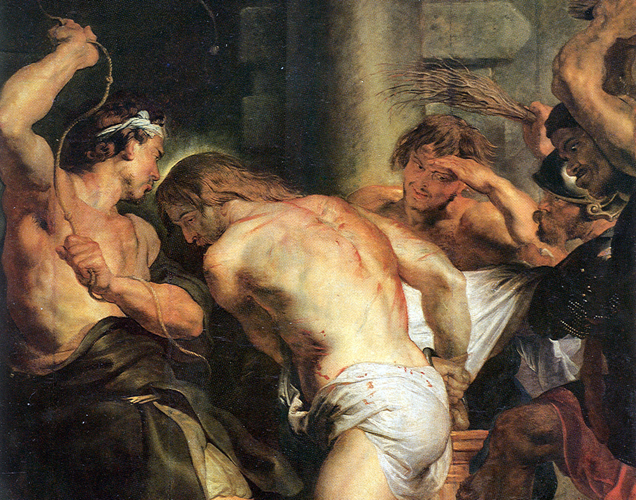 When I picture this particular element of the Passion, I think of how easily annoyed I get at a cut or splinter.  Open wounds (if those could really be called wounds) are an inconvenience and can be felt in every movement.  A cut on the foot is felt with every step; a splinter in the hand is felt with every movement.  After the scourging, Jesus’ body was covered in open wounds. He was in the most acute pain.  His energy drained as a result of the pain and loss of blood, it must’ve taken great effort to put one foot in front of the other.  I imagine how painful the purple cloth must’ve been when the soldiers put it on His back to mock Him (Mark 15:17).  Here, too, Jesus received the crown of thorns.

We also need a healthy conviction of our own sin to appreciate this part of the Passion narrative.  The mob that cried for Jesus’ execution seems unfeasible sometimes; how could they?  Wouldn’t I have done differently than the people that shouted for Barabbas?  Bl. John Henry Newman reflected that “His death-warrant is signed, and who signed it but I... Those sins of mine were the voices which cried out, ‘Let Him be crucified.’  That willingness and delight of heart with which I committed them was the consent which Pilate gave to this clamorous multitude.” This mindfulness of our own sins needs to be accompanied by love and gratitude toward God.  We can’t make the mistake of thinking sin is the only thing that defines us in God’s eyes; that’s a distortion of Christianity.  On the other hand, we can’t make the mistake of minimizing our sins, or sin in general.  At its very nature, sin is destructive; the devil’s aims with sin are to drive us into evil, despair, and finally, hell.  It took a dramatic rescue on the part of Our Lord to save us from sin’s clutches!

Our Lord Carries the Cross 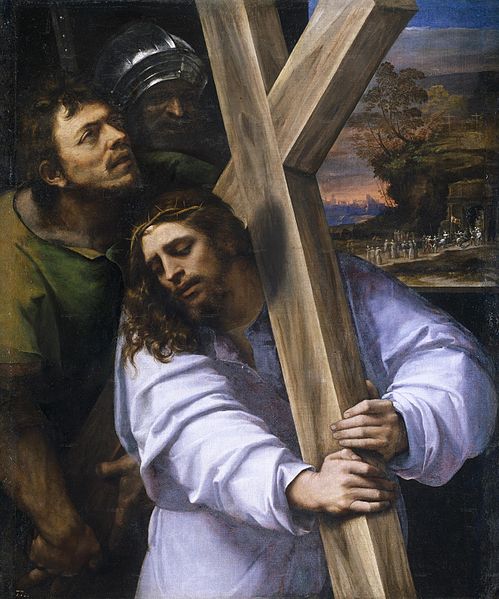 The depiction of Jesus carrying the cross has varied over the centuries.  Although in many works of art He carries the entire cross, i.e. two pieces of wood fastened together, it’s possible that the vertical portion of the cross was in a fixed place in the ground.  Jerusalem’s set place for crucifixions was Golgotha, or Calvary (Matt 27:33). The condemned would be forced to carry the crossbeam from the prison inside the city to a location outside the city; the crossbeam weighed about 100 lbs. Here we can imagine how difficult it would be for a man at full strength to carry the crossbeam for any distance.  Jesus picked up His cross having spent a wretched night in prison, with little to no sleep, watching His own people condemn Him, and being brutally scourged.  During the stations of the cross, Jesus falls three times. With his arms bound to the cross beam, he could do nothing to break his fall. Having to get up under the weight of that cross each time... having a 100 lb. log crash down upon Him each time He fell. Is it any wonder that the soldiers conscripted Simon of Cyrene to help Jesus? (cf. Luke 23:26)

Our Lord is Crucified

At the destination of Calvary, Jesus was first stripped of His garments.  Crucifixes always give Jesus a loin cloth, but in reality, Roman crucifixion was designed to be as gruesome, humiliating a death as possible.  The condemned were stripped naked in order to die with as little dignity as possible.

Next were the nails.  Iron spikes that averaged 5-7 in. in length were used to nail the arms of the condemned to the crossbeam, in the wrists (note on Mark 15:24 Ignatius Catholic Study Bible: New Testament). Although we often see that the palms of Jesus bore the nail wounds, they wouldn’t support the body weight of a person on a cross.  After the victim was nailed to the crossbeam, it was raised up and attached to the vertical beam.  The victim’s feet were nailed into the vertical beam; death awaited.

Death would surely come, most often by a combination of blood loss (from the scourging) and asphyxiation (note on Mark 15:24 Ignatius Catholic Study Bible: New Testament). The victim would only be able to take shallow breaths, until his arms weakened.  At that point, he would have to push his body up with his feet to breathe.  This would be terribly painful on multiple levels: putting pressure on the nail wounds in the feet and the hands, and rubbing the open wounds on his back up against a large beam of wood. Jesus had seven last words from the cross, all of which were probably labored and difficult. 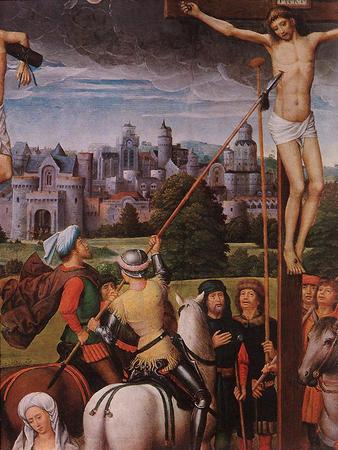 The executioners had two methods to ensure death: breaking the victim’s legs with a massive mallet and thrusting a spear through their torso.  Jesus was spared the first but not the second, even though He was already dead. (John 19:31-37)

We can gain a deeper appreciation of the crucifixion of Jesus by looking at the physical suffering He endured.  The details are unpleasant at best, and hideous at worst.  Cicero, the great Roman orator, urged that "the very mention of the cross should be far removed not only from a Roman citizen's body, but from his mind, his eyes, his ears.” It was simply unbearable!  Cicero saw nails, large wooden beams, and blood.  As Christians, we see an extraordinary act of love. On Good Friday, let the Passion spur a prayer of deep gratitude.  It is the great mystery of our faith: the ugliness of Good Friday opened the gates to our healing from sin.  “He Himself bore our sins in His body on the tree, that we might die to sin and live to righteousness.  By His wounds you have been healed.” (1 Peter 2:24)

Run to Him and be healed!

Do you meditate on the Passion of Our Lord in your prayer life?