This is the True Meaning of These Ancient Symbols

Catholic art is seldom a simple depiction of a person or scene. Rather, it is usually rich in symbolism that is not always apparent at a first glance. For example, icons are painted with a gold background to symbolize the glory of heaven and often contain letters that are abbreviations of longer phrases such as “Jesus Christ.” Paintings or statues of saints frequently depict the saint holding an object that symbolizes the method of their martyrdom or the work that characterized their life. For example, St. Bartholomew is often depicted holding his own skin because he was martyred by being flayed. St. Thomas Aquinas is often depicted with a pen in hand to symbolize his prolific theological writing.

The doctrines of the faith are also frequently depicted or symbolized in Catholic art. Many works of art directly and clearly depict the doctrine, such as a painting of the Blessed Mother being assumed into heaven or of the angel Gabriel announcing to Mary that she would conceive Our Lord by the power of the Holy Spirit. Some works of art also depict the Holy Trinity. Usually the Father and the Son are depicted as an older and a younger man, respectively, and the Holy Spirit is depicted as a dove.  Sometimes all three Persons are depicted as men. Frequently, however, the doctrine of the Trinity, among other doctrines of the faith, is depicted symbolically rather than directly. While it is impossible to accurately depict the Trinity in art, incorporating simple symbols of such a fundamental doctrine into works of art makes them richer in meaning and more fruitful for contemplation. 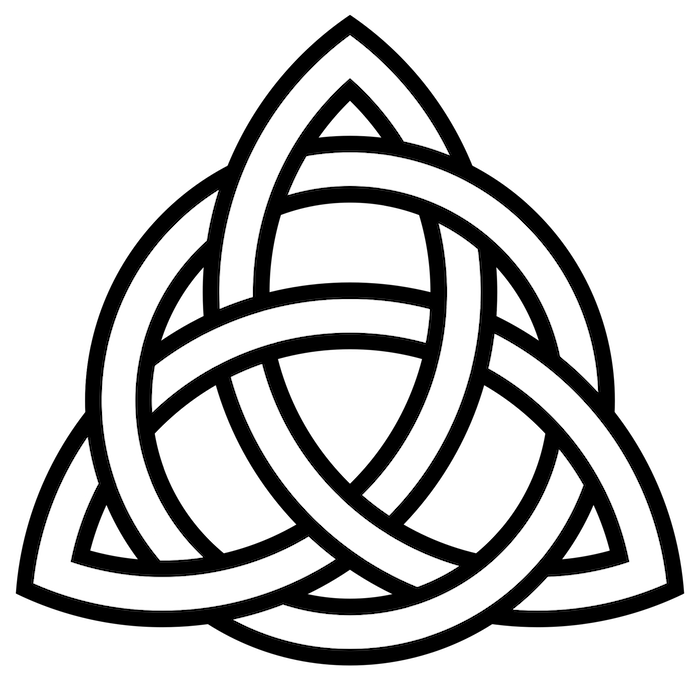 The triquetra or Trinity knot is a symbol that appears in several cultures around the world from ancient times, notably in the Celtic culture. The Book of Kells, an illuminated manuscript of the Gospels from ninth-century Ireland, contains depictions of the triquetra, but not necessarily with a religious significance. In more recent centuries the symbol has been used in Celtic art to signify the Trinity.

The Hands in Icons 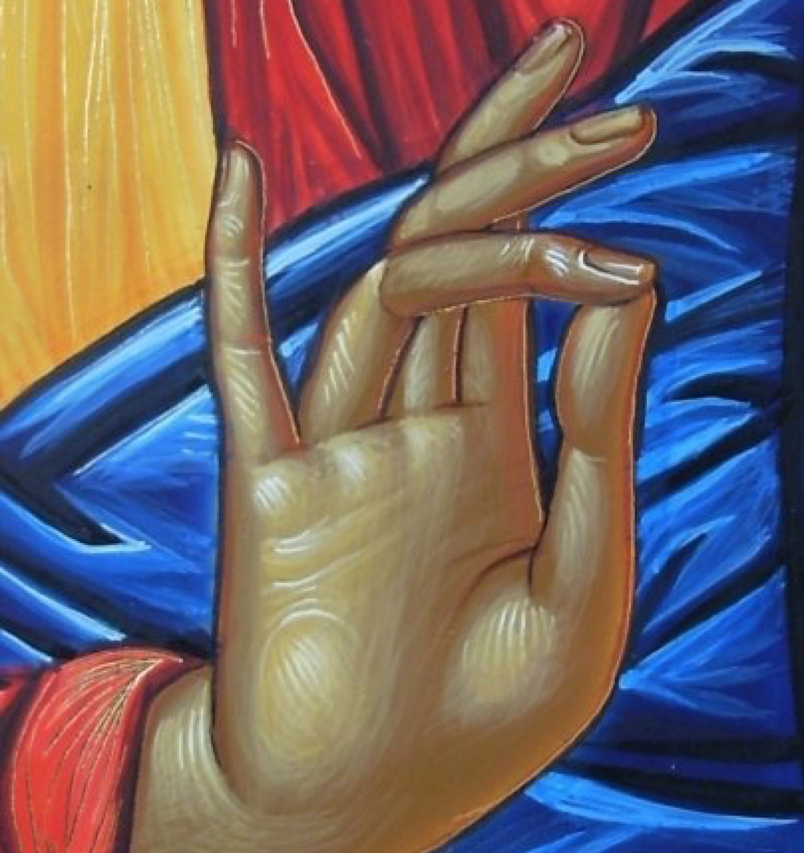 Iconography is traditionally traced back to St. Luke the Evangelist himself, who painted icons of the Blessed Mother and Sts. Peter and Paul. Iconography was developed more fully in its unique style in the Byzantine Empire by the sixth century. Icons do not depict the subject in a lifelike way, but rather in a stylized way that symbolizes the heavenly glory and sanctity of the person. When the person is Christ Himself or a cleric, the right hand is depicted in an attitude of blessing, with the thumb and ring finger touching. The index and middle fingers are usually either both extended, or the index finger is extended and the middle finger is slightly curved. The little finger is extended, curved, or next to the ring finger. One example is given in the image. This configuration of the hand is symbolic in many ways. The thumb and ring finger joined together can represent the two natures united in Christ in the Incarnation, and the other three fingers then represent the three Persons of the Trinity. Alternatively, the index and middle fingers extended can represent the two natures of Christ and the other three fingers bent together then represent the Trinity. Further, the extended index finger represents the letter I, the curved middle finger the letter C, the crossed thumb and ring finger the letter X, and the curved little finger the letter C. These four letters, ICXC (or IΣΧΣ), are the uppercase first and last letters of “Jesus Christ” in Greek: Iησους Χριστος (Iesous Christos). 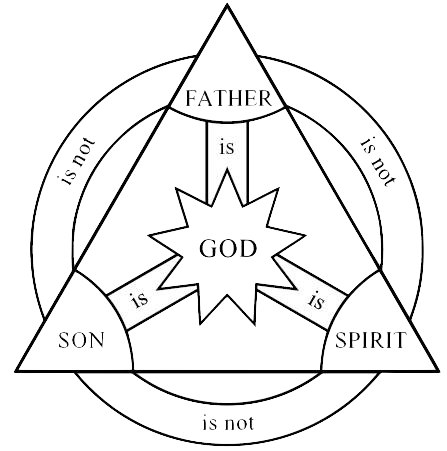 The Scutum Fidei or the Shield of the Trinity, represented here in a simple form that likely brings to mind memorizing the Baltimore Catechism in grade school, is a symbolic representation of the Trinity that lays out in diagrammatic and verbal form the basics of the doctrine of the Trinity. While it is clearly a catechetical tool, it is also encountered in art in a more decorated form. The Scutum Fidei appeared at least as early as the beginning of the thirteenth century in the writings of Peter of Poitiers. 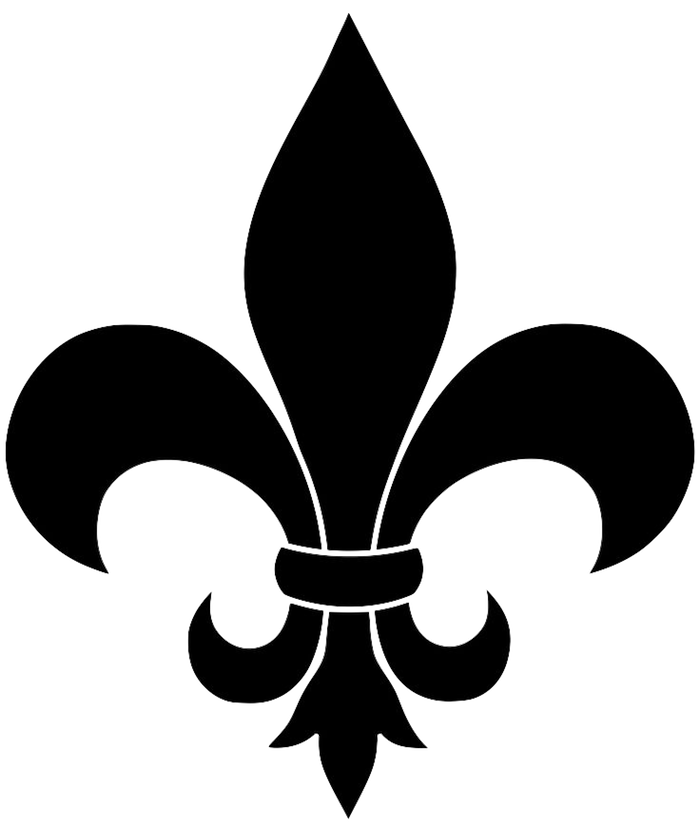 The Fleur de Lis occurred in various forms in many cultures of the world, perhaps most famously in France as a symbol of the French monarchy as early as the eleventh or twelfth century. The Fleur de Lis represents the Blessed Mother on account of her purity, but it also represents the Trinity. The three leaves represent the three Persons, and the band at the bottom can represent Mary or the Divine nature shared by the three Persons. 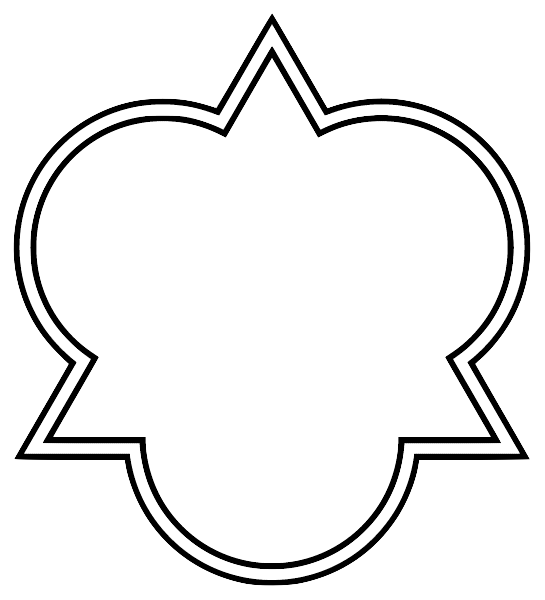 The trefoil triangle depicted in the image was used as a symbol of the Trinity in art and architecture in the Middle Ages. Symbols of the individual Persons, such as a hand, a fish, and a dove, are often placed inside the triangle. A simpler version of the symbol without the triangle points, called the trefoil, was also used as a symbol of the Trinity. 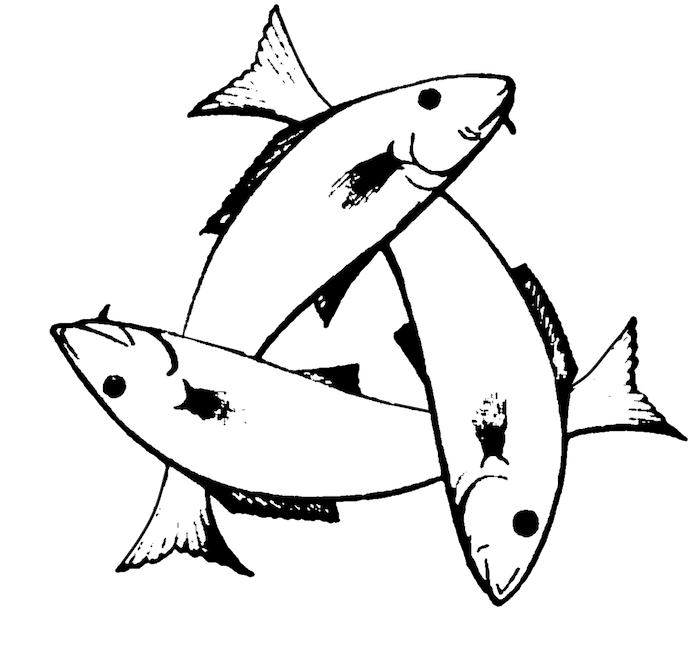 A triquetra in the form of three interlaced fish can also be used to symbolize the Trinity. From ancient times, a fish was used to represent Christ. The first letters of the words in the phrase Jesus Christ, Son of God, Savior, in Greek spell IΧΘΥΣ, or phonetic "ichthys," meaning fish. Drawings of single fish and triquetras of fish are found in the Catacombs in Rome, which are considered important in the history of early Christian art.

What other symbols of the Trinity do you know? Share in the comments!