5 Less Popular Saints That Will Surprise You

In our Catholic lives, it is possible for us to encounter saints constantly.  We pray to many of them each time we pray the Litany of the Saints in the Mass.  We see in our liturgical calendars that they are especially honored on their feast days, which gives us the opportunity to celebrate a different saint on every day of the year.  If you were baptized and grew up Catholic, it’s likely that you were named after a specific saint or two, and have been hearing stories about their miraculous lives for a long, long time.

There are a number of saints that have become household names.  St. Francis of Assisi, St. Joan of Arc and St. Patrick are a few saints that are so lauded that they are often even admired by secular society.  Not all saints, however, are so well-known: in addition to the number of saints whose names you might find familiar, there is a vast number of saints who have been recognized by the Catholic Church but who are not often spoken of very often.

Why Do We Canonize Saints?

Before we learn about a few of these more obscure saints, let’s consider for a moment why the concept of canonization exists.  If you think about it a little more in depth, it might seem curious that although every soul in heaven is a saint, only some are officially recognized by the Vatican.  One might say that the process of canonization seems too exclusionary or limited, given the many, many holy men and women who have lived and died as wonderful Catholics.  Why select a few and ignore the others?

The process of canonization, however, is intended to emphatically recognize certain holy men and women for their extreme virtue and for any miracles they may have worked in their lifetimes.  By further investigating their lives and works, we can learn how closely they aligned themselves to their faith by their virtue, since the process of beatification and then canonization involves closely examining their lives, reading any works they may have written, and learning about them from people who knew them.  Knowing so much about these saints gives us amazing examples of how we can best live our lives as Catholics, and gives us ideals of virtue towards which we can strive.

The fact that saints are patrons of certain things also shows us how to let our Catholic faith permeate our lives more fully.  If you can name it, there likely is a patron saint for it!  Are you a farmer?  St. Isidore is your patron.  Afraid of wasps?  Invoke St. Friard.  Going spelunking?  Pray to St. Benedict of Nursia.  Prone to oversleeping?  Pray to St. Vitus!  For as many saints as there are, there is a corresponding number of things of which they are patrons.  This means that no matter what we are doing or feeling in our lives, we can recognize that all aspects of our lives can be devoted to God.

A few of those names above might not be familiar to you.  In the course of the Church’s rich history, it is inevitable that there are certain pieces of the faith that might be less frequently discussed.  These can vary from country to country or rite to rite, as a saint that might be unknown in America might be another country’s patron, or a saint that might be unknown in the Roman Catholic Rite might be a popular one in the Byzantine Catholic Rite. Let’s learn a bit more about a few saints that are not so common, yet are no less deserving of prayer and honor. 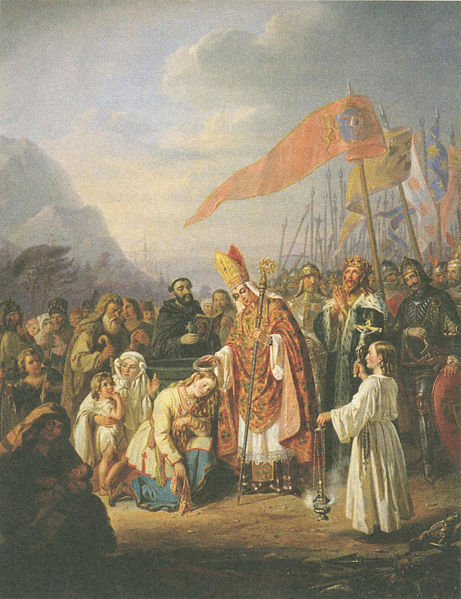 One of the saints who is not so well-known in America but is more known elsewhere is St. Henrik of Uppsala.  St. Henrik is the patron saint of Finland, and he is honored there by having the only Catholic place of pilgrimage in that country dedicated to his name.  Although he was never officially canonized, he was referred to as a saint in papal documents dated as early as 1296, and so has been given due reverence since then.

Henrik was born to an English family sometime in the early 12th century.  Not much is known about his early life, but we know that he became a bishop in Sweden in the mid-12th century, around the same time that efforts were being made to organize the Church in Scandinavia.  Near the time of his ordination, a man who later became known as King Eric the Saint had taken the throne of Sweden, and he and Henrik joined efforts to spread the truth of Catholicism throughout Scandinavian regions.

Henrik, at King Eric’s behest, traveled to Finland in order to evangelize the Finnish people.  He unfortunately did not live long in Finland before he was murdered by a pagan Finn who is known in legends by the name of Lalli.  There have since arisen legends surrounding the remainder of Lalli’s life.  The most impactful of these is that he lived the rest of his life being followed by gnawing mice, who eventually chased him into the sea, where Lalli drowned along with every single one of the mice.  The gnawing mice are intended to represent the gnawing of Lalli’s conscience after he killed a holy man.  Legends like this show the Finnish people’s admiration for St. Henrik, who died courageously in the name of evangelization.

Two saints who are known in the Eastern Rite, but not so much in the Western, are Sts. Boris and Gleb.  They were both the sons of St. Vladimir of Kiev, who was a ruler of the Kievan Rus’, a region of Slavic tribes in Europe.  St. Vladimir, a convert from paganism to Christianity, is credited with Christianizing the Kievan Rus’ after he gained control of it in the late 10th century and converted a few years later.

Boris and Gleb were recognized from an early age for their virtue and exemplary piety.  Their popularity among the Rus’ people contributed to the jealousy of their older brother Svyatopolk, who later became known as Svyatopolk the Accursed.  His jealousy grew to such a great extent that he began to contemplate assassinating his brothers.  He plotted to ambush them both as they were journeying to Kiev: Boris was wounded and traveling to Kiev after a previous assassination attempt, and Gleb had been summoned separately under false pretenses.  This new attempt succeeded, and Boris and Gleb were killed at the hands of their brother, just as Abel was killed at the hands of Cain.

Five years later, another one of Vladimir’s sons, known as Yaroslav the Wise, recovered the bodies of Boris and Gleb.  They were immediately recognized, as the bodies were found in an incorrupt state.  After Yaroslav entombed their bodies in a church near his home, the Church of St. Basil, the brothers became even more well-known and St. Basil’s became a popular site of pilgrimage.  Many miracles were worked through their relics, and Yaroslav succeeded in aiding their journey to canonization.  Although they were not officially martyred, since it was not for religious reasons that Svyatopolk killed them, they are known in the Eastern Rite as “passion-bearers,” for they humbly offered up their suffering in union with Christ’s.

Another saintly sibling relationship exists between St. Enda of Aran, an Irishman, and his sister, St. Fanchea.  Enda was a 5th-century prince who was converted to the Catholic faith by Fanchea.  Prior to his conversion, he was a pagan who had few qualms about participating in unjust wars.  Fanchea, however, was a holy woman who (according to legend) was converted and veiled by St. Patrick himself.  She convinced Enda to retreat from these kinds of wars, and in exchange for that agreement, Enda requested that Fanchea find a woman for him to marry.

Fanchea agreed, but by a strange turn of events, the woman who Enda was to marry died suddenly.  Fanchea chose this opportunity to remind Enda of mortality, God’s judgment and the passing of earthly things.  Enda, moved by her words, began the process of conversion and eventually became a monk.  After Enda was given the Aran Islands by his brother-in-law, King Aengus, he brought a group of monks to the largest island and thus founded the first true Irish monastery.  Enda and his monks lived a monastic life there in Benedictine-like simplicity.  The Aran Islands became hailed as a holy place, and many Irish saints have been influenced by them in one way or another.  Enda, after his death in 530, became known as one of the founders of Irish monasticism, and is now the patron of the Aran Islands.  Not as much is known about the end of Fanchea’s life, but by many accounts, she seemed to live a holy life as a nun, and was credited with the conversion of her brother as well as supporting her fellow Irish nuns.

Saints Henrik, Boris, Gleb, Enda, and Fanchea, pray for us!