“In order to communicate the message entrusted to her by Christ, the Church needs art. Art must make perceptible, and as far as possible attractive, the world of the spirit, of the invisible, of God.”

So writes St. John Paul II in his Letter to Artists, written in 1999.  In this letter, he writes of the importance of the artist in the life of the Church; one whose vocation is to communicate the beauty and truth of Christianity through the skill with which he or she has been gifted.  St. John Paul II emphasizes the importance of art in the modern era, as he notes that in our cultural atmosphere, the world of art and the world of faith can be all too easily separated.

Throughout the centuries, the Church has been one to uphold a variety of arts, from visual arts to music to architecture.  When we walk into a church, one of the first things we as people notice is the appearance and the atmosphere.  Sometimes a beautiful church can make us feel immediately reverent and prayerful, whereas one that lacks skilled ornamentation or architecture may dispose us to feeling something a bit less than reverent.  This is something that we might notice in our everyday lives.  If we are in an environment that appears messy or chaotic, it often is reflected in our internal disposition; likewise, our internal disposition can often have a great bearing on the care that we give to our surroundings.

We certainly should not feel compelled to say that the appearance of something is the most important.  However, it is manifestly true that as humans in the possession of senses, we cannot ignore our surroundings.  It is therefore of notable importance that we, as Catholics, should seek to surround ourselves with things that reflect our beliefs, that reflect Beauty.

One way that we can accomplish this is through living and praying with icons.  Many Catholics who have only attended the Latin Rite in their lives may not be familiar with iconography or really understand its importance.  Catholics who are Eastern Rite or who have attended it in the past will be quite familiar with icons, as they may be considered as the primary form of religious art in Eastern Rite churches.

What Is an Icon?

Many will ask what exactly an icon is, or what can be considered an icon.  It is first important to note that there is much more to the definition of an icon than simply a painting or piece of artwork.  The word “icon” comes from the Greek word eikṓn, meaning “image, resemblance.”  An icon, however, is more than simply a visual representation of a person, event or story: an icon is a sacred image that is meant for the purpose of fostering devotion and piety.  Icons are intended to be venerated in this way as a religious devotion.

Icons, interestingly, are not said to be painted.  The process of creating an icon is actually called writing an icon.  To make better sense of this, it is helpful to compare a piece of religious art, such as Michelangelo’s Sistine Chapel ceiling, with a traditional icon, such as the Our Lady of Perpetual Help icon.  One can easily wonder how an icon is said to be written whereas Michelangelo’s Sistine Chapel ceiling is not, even though the latter contains direct representations of a large number of stories and events in Scripture.

Part of the answer to that question lies in the differing styles.  The ceiling of the Sistine Chapel is a product of its time in a number of ways, from the appearance of the figures to the way in which they are outfitted.  In contrast, the style of an icon is timeless and deeply symbolic.  A given icon will contain a number of specific elements, including pictorial representations of theological truths, geometric composition that points towards the truths contained in Scripture, and small details that at first seem insignificant but prove to be symbols of the faith.  In this way an icon is a manifestation of the Divine in a way that a typical painting is not, and is a kind of visual theology that surpasses a typical piece of art.

The iconographer, seen from this perspective, transcends the role of the artist and becomes an author of sorts, a visual theologian.  Many have said that the purpose of the icon is to be Scripture in visual form, rather than to be influenced by the artistic styles of its time.  Because of this definition of an icon, we can say that the icon is written rather than painted, as it is the role of the iconographer to be a scholar of Scripture in some way and to exegete the truths contained therein.

To understand the importance and spiritual significance of icons, it is helpful to look at general symbolism in iconography as well as the symbolism contained in a specific icon.

When looking at a group of icons, one of the first things that we notice is a color scheme that is similar among the group: we see plentiful gold, red and blue.  The reason for the prevalence of these three colors is that they symbolize three core elements of Christianity: the gold represents the splendor of heaven, the red represents the presence of divine life, and the blue represents human life.  White is not a color that is often used in iconography, as it represents the Uncreated Light of Christ, and so is seen only in icons of the Resurrection and the Transfiguration. 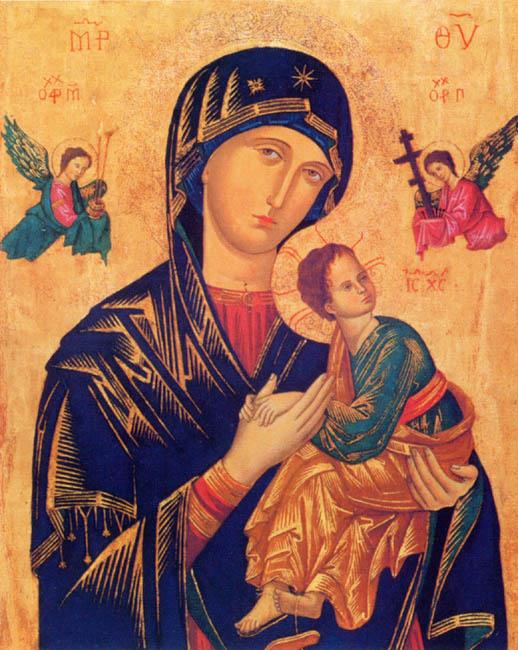 We see these colors used in this way in the well-known icon of Our Lady of Perpetual Help (pictured above), an icon that is believed to have originated somewhere between the thirteenth and fifteenth centuries.  Mary is shown clothed in a red undergarment with a blue outer garment, indicating the special presence of the divine in her human life as the Theotokos, or “God-bearer.”  The Child Jesus is robed in gold, showing the radiance of heaven contained in His Divine Person.  The gold background indicates Jesus’ triumph over sin and death, and points towards the glory of the Resurrection.

The posture of the figures, as well as the clothing, reveals a Scriptural understanding of whoever is portrayed.  In this particular icon, Jesus is shown looking towards the Archangel Michael holding the Cross, one of the instruments of His Passion.  On the other side, we see the Archangel Gabriel holding the vinegar-soaked sponge offered to Jesus as he was dying and the spear which pierced His side.  This recalls Jesus’ passion as well as the words St. Simeon spoke to Mary: “…and a sword will pierce through your own soul also.”

Mary is shown holding Jesus with one hand and gesturing towards him with the other, as if presenting him to us.  This is to show the reality of the Incarnation: Jesus was fully human and fully a child of His mother while also being true God.  His two natures – human and divine – are also represented by a shoe falling off of only one of his feet.  The foot bound by the sandal shows His humanity, fully alive on earth, while the foot that is raised above the sandal that appears to be falling off shows His ability to reign over the earth as God.

The further we study an icon, the more elements we are able to notice and reflect on.  This makes icons a beautiful addition to the home: traditionally, they are venerated as a sacred image, and they prove to offer a beautiful way to pray and meditate on our faith.  It is a gift to be able to have a devoted spot in a home where icons may be venerated and prayed with, and may be something to consider for those new to this profound and meaningful tradition.