Did You Know the First ‘Thanksgiving’ Was Actually the Catholic Mass?

October and November bring with them the sight of pumpkins on people’s porches, the smell of apple cinnamon, and the eager planning of the Thanksgiving meal. Whether it is with family or friends, most people spend a couple weeks or months planning out who will host, who will bring what dish, and maybe which cousins will be on which football teams at grandma’s house. It’s a great American tradition to spend the day with loved ones and remember to rejoice in the bounty we have and to count our blessings.

American school children are taught through colorful books with pilgrims and natives on the front cover that the first Thanksgiving was at Plymouth in what is now Massachusetts in 1621. Plays are performed throughout the country that recount the tale of gratitude after the first harvest. The pilgrims gave glory to God with their native neighbors and they shared a feast of autumnal bounty together. It is a beautiful story, and it is the story that inspired Abraham Lincoln more than two hundred years later to establish Thanksgiving as a national holiday during the midst of the Civil War in 1863.

Decades Before the Pilgrims Came the Spaniards

In 1565 (some 56 years before Plymouth), a fleet of Spanish ships carrying some 800 colonists and 700 soldiers sighted land on August 28, the feast day of St. Augustine. Due to this providential timing, the colony would be named in his honor.

Ten days later, the entire colony went ashore on September 8, the feast of the Nativity of Mary. Father Francisco Lopez de Mendoza Grajales, the expedition’s chaplain, records in his memoirs that he went ashore the night before so that he could receive the admiral of the fleet as he walked onto the new land. Father Francisco walked forward to Don Pedro Menendez, who knelt and kissed a crucifix on the beach. As he did so, he claimed the land for the glory of God and for the king of Spain. The soldiers and colonists likewise kissed the crucifix and sang the Te Deum in praise of God.

This was not the first time Spaniards had landed in what would become Florida. In 1559 explorer Tristan de Luna established an early colony in Pensacola, but it was abandoned after two years. The Spanish returned to this land under the leadership of Menendez better supplied and ready to build a lasting settlement, so their safe arrival at what would become the St. Augustine colony was indeed a great cause for celebration. There were 8 ships that left Spain to establish a new colony, and only four arrived due to hurricanes and other difficulties at sea. Those who made it had great cause for gratitude.

The first order of business when colonists came ashore was to construct a makeshift altar so that Father Francisco could celebrate a Mass of Thanksgiving for their safe arrival. As the Spaniards prepared for Mass, curious Timucuan natives gathered to investigate the foreign newcomers. The Timucuans stayed to watch the Spanish celebrate the Mass and imitated what they saw them doing. This was the true thanksgiving – the celebration of the Eucharist. The Greek word eucharistia means thanksgiving. When we celebrate the Mass, it is an offer of thanksgiving for all that God has done, is doing, and will do for us. The Spanish colonists knew that the first thing to do was to give thanks and praise to God for allowing them to cross the Atlantic and land upon Florida’s shores.

Not only did the celebration of Mass take place, but immediately following Mass the Spanish celebrated their arrival and the Nativity of Mary with a huge feast. Father Francisco and the Don Pedro Menendez insisted that the Timucuans should be invited to join in the festivities. Father Francisco’s memories recount that Menendez insured that the natives were fed first before he himself dined.

Unlike the harvest meal shared by the Pilgrims and Wampanoags after a year working the land, the meal shared by the Spanish and Timucuan was of a different sort. Author Robyn Gioia speculates that the Spanish would have had a stew that was easy for them to prepare on board called cocido which is made of pork, garbanzo beans, garlic, cabbage, and onion. They likely accompanied this hearty stew with the hard biscuits that fare well on long voyages. Because it was a joyful celebration, red wine was likely to have been passed around in utmost hospitality. Based on what is known about the Timucuans, they likely would have contributed some wild game and fresh seafood, as well as beans and squash, to this celebratory meal.

This beautiful story of the Spanish colonists giving thanks to God and sharing a communal meal with the Timucuans was largely lost to time until historian and University of Florida professor Michael Gannon wrote his book The Cross in the Sand in the 1960s. Since then, many Catholics have turned to look at this event in St. Augustine in 1565 as the first real Thanksgiving in North America, the first time that natives of the New World joined colonists from the Old World in share a communal meal in thanksgiving for the goodness and abundance of God. 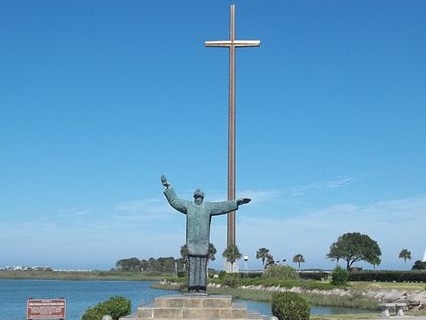 A stainless steel cross, well over 200 feet tall and the tallest free standing cross in North America, marks the spot where the first Mass was said in St. Augustine. Nearby, the Shrine of Our Lady of La Leche stands as the first shrine to the Blessed Mother in the United States. Devotion to Our Lady of La Leche – Our Lady of the Milk and Happy Delivery – was widespread in Spain at the time the colonists arrived. The providential arrival on the shores of La Florida on Our Lady’s birthday soon led to the building and dedication of the shrine to Our Lady of La Leche.

Giving Thanks Every Time You Go To Mass

How fitting it is that the first Thanksgiving was truly the celebration of the Holy Mass. How right and just to give thanks and glory to God for his goodness. May we learn from these devoted Spaniards and curious Timucuans how to celebrate with joy God’s loving and mysterious providence. May this story from our Catholic heritage in the United States be a reminder that the ultimate act of gratitude is the Mass itself. Christ’s Paschal Mystery is made present in every celebration of the Mass, and for what can we have greater gratitude than that the Son of God became man and suffered, died, and rose from the dead that we might have life? Through the consecrated hands of the priest, through his speaking the words of Christ, through his being in persona Christi, through Christ’s grace: God becomes present to us under the appearance of bread and wine. Yet  Christ is present body, blood, soul, and divinity in the Eucharist. He comes to us that we might partake in his very life. What great cause for gratitude, celebration, and joy.

May we be encouraged to begin Thanksgiving day with the celebration of Mass and then let it be followed by the lovely traditions we enjoy as Americans. This Thanksgiving, may we be ever more aware of God’s providence and gratuitous gifts to us.