The Feast of the Archangels Michael, Gabriel, and Raphael

History of the Feast of the Archangels

On September 29th, the Church celebrates the feast of the archangels Michael, Gabriel, and Raphael. This feast originally celebrated only St. Michael, and was even a holy day of obligation in the middle ages. In some countries, the feast of St. Michael was known as “Michaelmas,” a term frequently encountered in old English novels such as those by Austen and Dickens. Michaelmas was also an important day in the fiscal year in several countries including England. Before the institution of the new liturgical calendar, the feasts of Sts. Michael, Gabriel, and Raphael were celebrated on different days, but are now consolidated into a single feast. Michaelmas was often celebrated in the British Isles by cooking a goose, making a special bread called Michaelmas Bannock, and making a blackberry pie from the last blackberries of the season.

Readings for the Feast of the Archangels

The scripture readings at Mass for this feast contain some of the most descriptive passages about the angels in the Bible. Part of the optional first reading from Revelation 12 reads:

War broke out in heaven;
Michael and his angels battled against the dragon.
The dragon and its angels fought back,
but they did not prevail
and there was no longer any place for them in heaven.
The huge dragon, the ancient serpent,
who is called the Devil and Satan,
who deceived the whole world,
was thrown down to earth,
and its angels were thrown down with it.

This passage recounts the great battle in heaven between the good angels, led by St. Michael, and the fallen angels, led by Satan, after Satan and his fellow fallen angels sinned against God. According to St. Thomas Aquinas, the Devil’s sin consisted in desiring to be like God by seeking happiness proceeding from his own nature rather than from a gift of God. Thus, he committed a sin of pride and enticed the other fallen angels to follow him in his sin. St. Michael and the good angels then cast the Devil and the fallen angels out of heaven. The spiritual battle between good and evil and even between the angels and demons continues to this day. Demonic activity is no doubt behind the many evils afflicting the world and the Church today, especially the rampant sexual immorality prevalent in modern culture and even among some members of the clergy. However, this passage from Revelation gives us hope because it shows us that the forces of Heaven will always prevail over the forces of Hell. We should pray to our guardian angel and to St. Michael daily, asking them for assistance in resisting the temptations and assaults of the demons levied against the Church and against our own virtue.

I will give thanks to you, O LORD, with all my heart,
for you have heard the words of my mouth;
in the presence of the angels I will sing your praise;
I will worship at your holy temple
and give thanks to your name.

This verse vividly describes the reality in which we share at each Mass, which is a participation of the eternal sacrifice offered in heaven to the Father by Son in the presence of the angels. Indeed, angels are certainly present with us in church during the celebration of Mass. This reality is expressed in the words of the Roman Canon: “In humble prayer we ask you, almighty God: command that these gifts be borne by the hands of your holy Angel to your altar on high in the sight of your divine majesty.” The above passage from Psalm 138 also foreshadows our own participation at the heavenly altar after our death when we will worship God side by side with the saints and angels.

Who are the Archangels?

Michael, Gabriel, and Raphael are the only angels mentioned by name in the Scriptures. St. Michael appears several times in the Bible, and is usually represented as fighting the devil. For example, as quoted above, Revelation 12:7 says, “War broke out in heaven; Michael and his angels battled against the dragon,” and Daniel 12:1 says, "At that time there shall arise Michael, the great prince, guardian of your people." St. Gabriel’s most famous appearances in the Bible are when he announces the birth of St. John the Baptist to Zachary and the birth of Jesus to the Virgin Mary. Because of these contrasting roles of Michael and Gabriel, Michael is often associated with judgment and Gabriel with mercy. The archangel Raphael takes the form of Azariah, who travels with and aids the young Tobit in the Book of Tobit and then heals the elder Tobit of his blindness. Thus, Raphael is associated with healing. 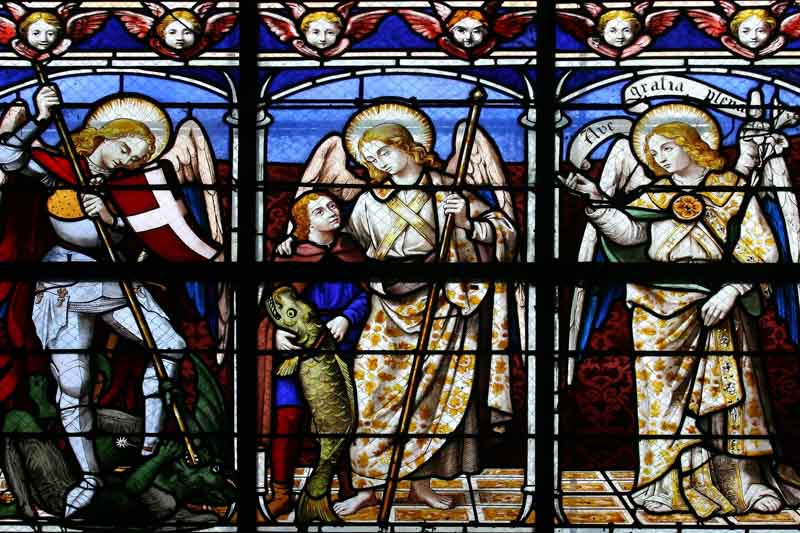 The term “archangels” refers to one of nine choirs or classes of angels described in scripture and by theologians. The angels are pure spirits who, contrary to popular depiction, do not have winged bodies. Because they do not have bodies to differentiate themselves from each other, each of the countless number of angels is its very own kind or species of angel. Also, the angels cannot die because they do not have a body that can be separated from its soul. However, angels can assume bodies, such as when Raphael did in his interactions with Tobit, in order to facilitate more familiar communication with human beings.

As pure spirits, angels have an intellect and a will by which they can know God and created things and act upon created things. Angels are ranked into the various choirs based upon the degree of knowledge they possess. From highest to lowest, these choirs are the Seraphim, Cherubim, Thrones, Dominations, Virtues, Powers, Principalities, Archangels, and Angels. St. Thomas Aquinas in his Summa Theologiae in turn divides these nine choirs into three groups of three choirs each according to the kind of knowledge they have of created things. Aquinas says that the highest group knows things insofar as they come from God, Who is the creator and first principle of all things. The second group knows created things as they are related to the highest created causes. Finally, the lowest group knows created things in their individuality.

St. Thomas further says that the guardianship of man belongs to the lowest angels. Thus, the guardian angels who each protect a single person would be members of the “Angel” choir. St. Michael, however, is an archangel because he guards the whole human race and is called “one of the princes” in Daniel 10:13. The Book of Tobit also calls St. Raphael “one of the seven, who stands before the Lord” (12:15). Similarly, St. Gabriel says to the Virgin Mary in Luke 1:19, “I am Gabriel, who stand before God,” showing that he belongs to the same choir as Raphael, that of the archangels. It has been suggested that Michael, Raphael, and Gabriel are Seraphim or Cherubim because of the above Scripture verses describing them as being in God’s presence. However, their duties consist in the protection of man and to announcing various tidings, such as the Incarnation. This relation to man places Michael, Raphael, and Gabriel among the lower angels.

Regarding guardian angels, paragraph 336 of the Catechism of the Catholic Church says the following: "From infancy to death human life is surrounded by their (the angels) watchful care and intercession. Beside each believer stands an angel as protector and shepherd leading him to life. Already here on earth the Christian life shares by faith in the blessed company of angels and men united to God." It is often easy to forget that each of us has a guardian angel doing his utmost to lead us to eternal life and defending us from physical and spiritual harm. We should pray every day to our guardian angel, thanking him for all that he has done for us and asking him to protect us in the future:

Angel of God, my guardian dear,
To whom God's love commits me here,
Ever this day be at my side
To light and guard,
To rule and guide. Amen. 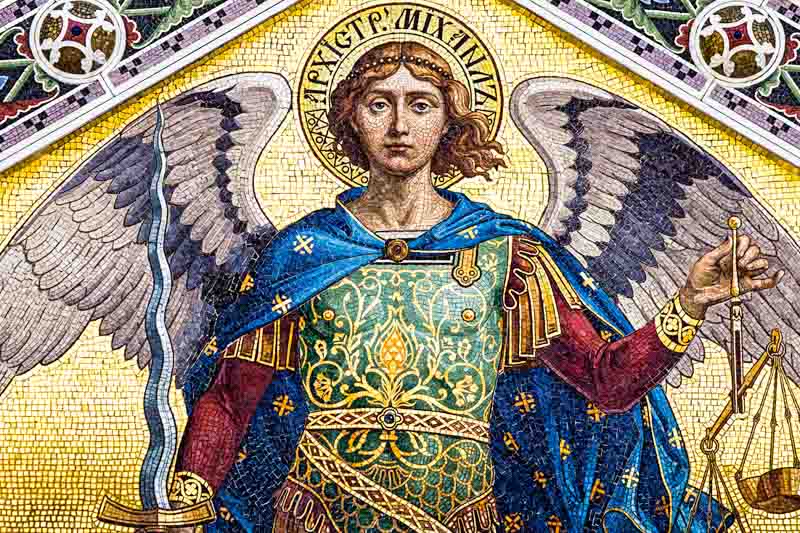 As mentioned above, praying to St. Michael for protection for ourselves and for the whole Church is also a good practice:

St. Michael the Archangel,
defend us in battle.
Be our protection against the wickedness and snares of the Devil.
May God rebuke him, we humbly pray,
and do thou,
O Prince of the heavenly hosts,
by the power of God,
cast into hell Satan,
and all the evil spirits,
who prowl about the world
seeking the ruin of souls. Amen.