Why Dorothy Day is a Servant of God

“The biggest challenge of the day is:  how to bring about a revolution of the heart, a revolution that has to start with each one of us,” stated Dorothy Day.

Dorothy Day has been called a saint for modern times. Perhaps, this is because she first tried to live the ideals of the modern world only to discover that the promises of modern secularism are not the solution to suffering or the key to finding happiness.

“She confessed openly in her autobiography to having succumbed to the temptation to solve everything with politics, adhering to the Marxist proposal: ‘I wanted to be with the protesters, go to jail, write, influence others and leave my dreams to the world. How much ambition and how much searching for myself in all this!’ The journey towards faith in such a secularized environment was particularly difficult, but Grace acts nevertheless, as she pointed out: ‘It is certain that I felt the need to go to church more often, to kneel, to bow my head in prayer. A blind instinct, one might say, because I was not conscious of praying. But I went, I slipped into the atmosphere of prayer....’ God guided her to a conscious adherence to the Church, in a life dedicated to the underprivileged,” stated Pope Benedict XVI in his February 13, 2013 General Audience.

Dorothy Day was born in 1897 to a nominally Protestant family.  She was baptized and confirmed in the Episcopal Church of Our Savior in Chicago at the age of thirteen.  In college, she rejected organized religion because she didn’t see “religious people” helping the poor.  By her mid-twenties she had experienced an out of wedlock pregnancy, an abortion, a failed marriage and survived a suicide attempt. She then began cohabitating with the love of her life and found herself again pregnant. She even supported herself by working as a screen writer in Hollywood for a period.

How many in the modern world can draw close having experienced similar sorrows. Still we can learn a great lesson of mercy from her life. Her abortion was no doubt a pivotal experience that she carried with her. However, she gave birth to her daughter Tamar in 1926. Having experienced great sorrow over her previous abortion and fearing that she would be unable to become pregnant again because of the abortion, she saw the birth of her daughter as a sign of God’s mercy and her own possibility of redemption. In this way becoming a mother became the impetus for her conversion and a key to her own “revolution of the heart.”

In 1932, she met Peter Maurin, co-founder of the Catholic Worker Movement and they began the movement in 1933. The Catholic Worker newspaper published its first issue during the Great Depression in 1933.  It sold for a penny a copy.  Day, a journalist, helped found the paper.  Additionally, she helped the movement found houses of hospitality located in various cities.

Here we find another valuable lesson. It should be noted that Day did not start out with the intention of founding a “movement”. Rather, she set out simply to follow God’s call committing her talent as writer toward the cause of justice. Likewise, the catholic worker houses always maintained an individuality, being formed in the image of a family rather than a social project. At the heart of each Catholic Worker home was the thought that it would be a place where the poor and needy could experience love and not just a handout.

“We try to shelter the homeless and give them clothes,” explained Dorothy Day, “but there is a strong faith at work.  We pray.  If an outsider who comes to visit us doesn’t pay attention to our prayings and what that means, then he’ll miss the whole point.”  Beyond their noted hospitality, Catholic Worker communities are known for activities in support of human rights and the development of a nonviolent culture.

Today, many are located in run-down sections of many cities.  Food, clothing, shelter, and other necessities and welcome are given by unpaid volunteers to those who need. They stress voluntary poverty, community, prayer, and hospitality.  Currently, there are over 240 Catholic Worker communities throughout the world. 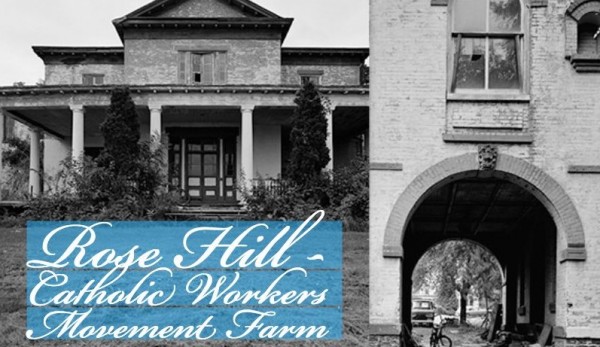 The Catholic Worker movement has refused to apply for federal tax exempt status as they see such recognition as binding to the state and limiting the movement’s freedom.  Each community is autonomous.  Since Dorothy Day’s death, there is no central leader.  Many active in the Catholic Worker movement have been jailed for acts of protest against racism, unfair labor practices, social injustice and war.

Dorothy Day herself was jailed multiple times, most notably four times from 1955 to 1959 for acts of civil disobedience.  She and others refused to take shelter during civil defense drills that simulated a nuclear attack.  Her last time in jail was in 1973 at the age of 75.  She died in 1980.

Her cause for canonization has been officially opened.   Dorothy Day “shows that ordinary people can live by the Sermon on the Mount.  She tried to relate the Sermon on the Mount to everything she did.  This makes her a tremendous inspiration for lay people.  Most saints appear to be hedged in by vows or life style, but Dorothy wasn’t hedged in by anything,” stated Eileen Egan, a lifelong friend and colleague.

However, Dorothy Day’s extreme example of detachment and concern for the privileged was a very specific call and one that combined the practice of charity with the call for justice.  This has always caused controversy.  However, today, we can still take inspiration from her example.

“Whatever I had read as a child about the saints had thrilled me,” stated Day. “I could see the nobility of giving one’s life for the sick, the maimed, the leper.  Priests and Sisters the world over could be working for the littlest ones of Christ, and my heart stirred at their work.  But there was another question in my mind.  Why was so much done in remedying the evil instead of avoiding it in the first place?…  Where were the saints to try to change the social order, not just to minister to the slaves, but to do away with slavery?”

Often, when the church canonizes laypeople, these men and women who in both experience and spirituality were basically indistinguishable from those in religious orders.  Dorothy Day experienced both the joys and sorrows of family life.  Robert Ellsberg, a former editor of the Catholic Worker newspaper, suggests the gifts Dorothy Day offers to the world now are:

“The ability to oppose the ideological enticements of her time in order to choose the search for truth and to open herself to the discovery of faith was witnessed by another woman of our time, the American Dorothy Day,” stated Pope Benedict XVI.In November 2012, the United States Conference of Catholic Bishops readily endorsed her cause to sainthood.  Following the review of a biographical presentation grounded in the context of history that reveals Dorothy Day’s unique holiness and gifts to the church.  After a documented miracle linked to her, Dorothy Day could be declared “Venerable” and then later “Blessed.”  After a second documented miracle, Dorothy Day could be formally recognized as a saint.

If you would like to learn more about Dorothy Day and her conversion story, please visit Ave Maria Radio's Kresta in the Morning for a wonderful interview with Terrence Wright author of the Dorothy Day biography entitled: Dorothy Day: An Introduction to Her Life and Thought.