Here Are 6 Of The Most Inspiring American Women Saints

Throughout history, many women have left behind notable legacies that eventually end up in history textbooks.  But many of the most heroic women, steeped in virtue, remain unknown by the general population and even perhaps on the periphery in the minds of faithful Catholics.  These six American women saints all carried a torch of charity in their hearts that was translated into educating the oppressed and minority groups, caring for the sick and dying, and establishing places of prayer and homes for orphans.  They epitomize and personify every corporal and spiritual work of mercy, and because of them, every American has access to health care and education.  For this and many innumerable hidden deeds they performed, these women should be lauded and invoked for guidance.

Elizabeth was born into high society New York in 1774. Her parents were Episcopalians, educated, and well-poised in the ways of the world.  But her heart drew her to a love beyond that which the world promised: first through her marriage, then extending to the Catholic Church.  Because she was deeply concerned for the salvation of those she loved following her conversion, she desired to catechize and educate children in faith and academic formation.

As a widow, St. Elizabeth eventually felt a call to the religious life and, despite countless obstacles and setbacks intended to thwart this call, she entered and became “Mother Seton” as the Rule of the Sisterhood she initiated grew to include St. Vincent de Paul’s Rule for his Daughters of Charity.  Her order is known as Sisters of Charity.

St. Elizabeth died of tuberculosis in 1821, but her legacy in the United States remains one attributed to our modern-day education system.  She founded the first Catholic girl’s school in Maryland, and Catholic educators often are encouraged to call upon her for guidance and intercession in their daily duties.

A woman of grit and grace, St. Elizabeth’s strongest charisms included prayer, teaching, and evangelization.  She is a strong example of deep love for Jesus that translated into a longing for His people to be united with Him through the Sacraments and into eternity.  We can learn much from that longing as we strive for Heaven. 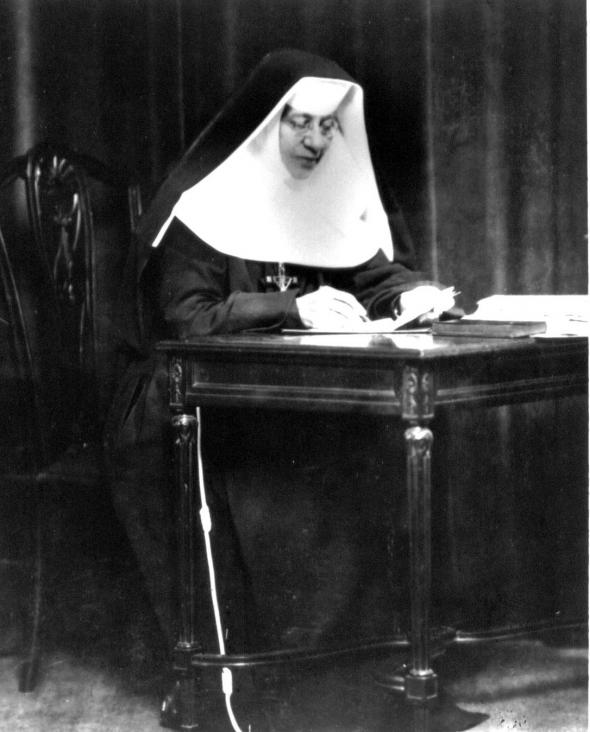 Like St. Elizabeth Ann Seton, St. Katherine Drexel was born into prominence in 1858, and she adopted a specific love for Black and Native American peoples.  When she realized that her donations to help them weren’t sufficient, she was led by the Holy Spirit to found Sisters of the Blessed Sacrament for Black and Native American Peoples.  She knew the time had arrived to be Jesus’ hands and heart through serving in a religious community.

St. Katherine founded the first mission school for Native Americans in Santa Fe, New Mexico, with other schools quickly popping up afterward to serve both Native American and Black peoples.  She saw a need and filled it first with the outreach of financial charity, then by becoming a domestic missionary and reaching people where they could be found.

She died in 1855 at her motherhouse (where she is buried) at the age of 96 and is most remembered for her selfless service, fortitude, and desire for unity through educating all people.  Before the Civil Rights Movement of the 1960s, St. Katherine began a similar initiative through her social outreach to minorities.  We can draw from her life and legacy an intention to love and serve the oppressed in our own communities. 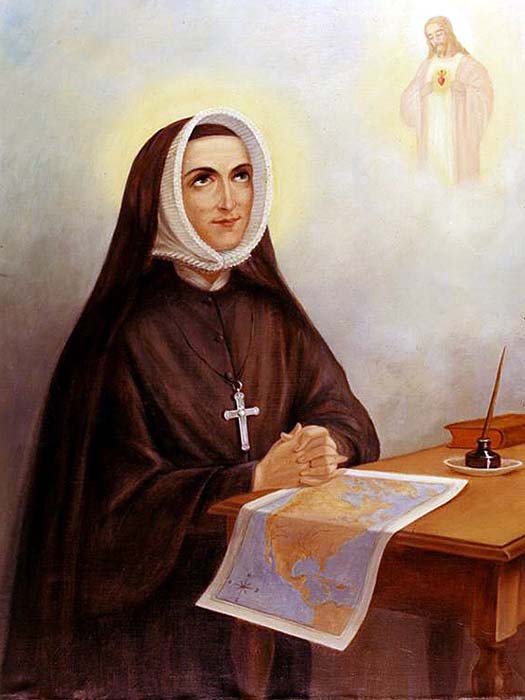 A woman of incredible humility and integrity, St. Rose was born in France in 1769, became a religious sister, and eventually was sent to the United States when she was 49 years old.  Shortly thereafter, St. Rose made the western part of the country her mission field, founding schools for Native Americans, orphanages, and generally serving the th

en undeveloped and comparatively uncatechized portion of the nation.

As one of the early Religious Sisters of the Sacred Heart of Jesus, St. Rose (along with Madeleine-Sophie Barat) founded a branch of their congregation in the United States after their arrival.  Her life was one of relentless service and dedication, and she is well known for her selflessness, compassion, and quiet zeal.

The end of her life was fraught with suffering and interior fears, as St. Rose became blind and was bereft of companionship or spiritual consolations.  She died at the age of 83 in 1852.  When her remains were exhumed, they were found incorrupt, which opened her cause for canonization.  When we are experiencing spiritual darkness, we can remember St. Rose and her self-acceptance and self-resignation to the Divine Will for her life, knowing that God is with us as much as He was with her throughout her life and her suffering.

Born in Germany in 1838, St. Marianne Cope spent the majority of her life serving lepers in Hawaii and is best known today as the patron saint of lepers, outcasts, and those with HIV/AIDS.  As a Third Order Religious Sister of Saint Francis, she began her novitiate educating and advising immigrant children in New York, but once she became the Superior General of her congregation, she received a plea from King Kalakaua in Hawaii.  He sent her a letter of desperation, since many Hawaiian natives were dying from leprosy in droves.

Moved with compassion, St. Marianne could not deny entering the mission field of Hawaii, though she was well aware of the risks and exposure to leprosy she would encounter.  Since over fifty religious orders had previously denied the king his request, St. Marianne knew that charity was drawing her sisters to care for the people of Hawaii and bring Jesus to them through their works of mercy.

While in Hawaii, St. Marianne oversaw a hospital specifically provisioned for those suffering from the most severe cases of leprosy.  Miraculously, she never contracted leprosy herself but instead died in 1918 due to complications from frailty and old age.  Her intercession has been sought for those with incurable diseases and illnesses.  We can learn from St. Marianne’s example of heroic charity that, when God calls us to impossible things, we can trust Him with confidence, knowing that He will accomplish amazing things through our yes. 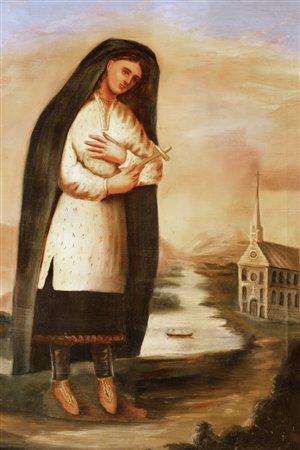 St. Kateri was born into the Mohawk tribe in the northern portion of New York state in 1656.  When she was four years old, she lost her mother to smallpox and eventually contracted it herself.  Though she survived, her face was pockmarked severely.  Once she was adopted by her aunt and uncle, she converted to Catholicism, despite full awareness of impending persecutions from members of her tribe.

Shortly following her conversion, St. Kateri transferred to a small colony of Christians in Canada and had a particular devotion to the Eucharist and Jesus in His Passion.  She even waited patiently outside of the chapel until it opened at 4 a.m. every day and remained in prayer there until the last Mass ended.

St. Kateri was faithful to Jesus until her death at the age of 24.  She is well-known as the “Lily of the Mohawks” and is the patroness of ecology and the environment.  Today, we can follow St. Kateri’s example of perseverance in persecution and fervent prayer through trials and suffering. 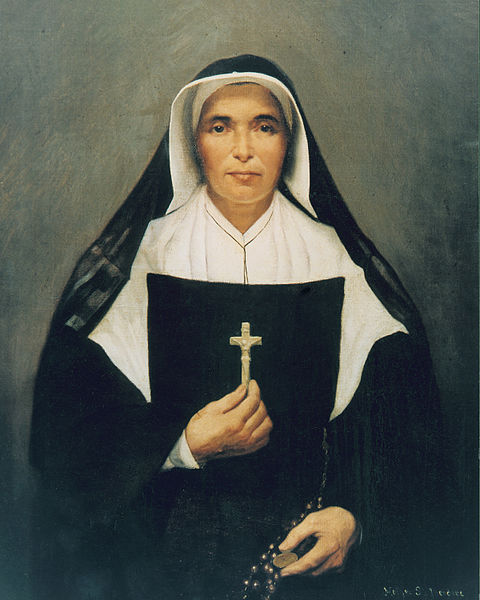 Anne-Therese Guerin was born in Brittany, France in 1798. At the age of 25, she entered the comparatively young congretation of the Sisters of Providence of Ruille-sur-Loir, taking the religious name of Sister St. Theodore.  For two years following the profession of her final vows, Sr. St. Theodore remained in France with her religious community working as a teacher and caring for the sick.

In 1839, however, the first bishop of the Diocese of Vincennes, Indiana sent a representative back to his native France in search of a congregation that would be willing to come and serve his diocese in the New World by teaching, providing religious instruction, and caring for the sick. When the representative approached the Sisters of Providence of Ruille-sur-Loir, the superior general of the order suggested Sr. St. Theodore for the task. After spending some time in prayerful discernment, Sr. St. Theodore agreed to accept the call to the Americas. She and 5 companions left their native France and embarked on the long and arduous journey to the New World.

Upon their arrival in October of 1840, Sr. St. Theodore shortly became Mother St. Theodore, the foundress and superior of the new order, the Sisters of Providence of Saint Mary-of-the-Woods. The sisters were exactly what the bishop had hoped for. Under Mother St. Theodore's guidance, they founded schools and orphanages and nourished the community in mind, body, and spirit. Mother St. Theodore was a tireless example of determination and faith in Our Lord. In spite of her fears and great obstacles, she took on all things with deep-rooted trust in Providence. This is a great lesson for us in the face of trials and doubts. Grace abounds, and our God is faithful. We are never abandonned.

What other Women Saints do you know and how do they inspire you?