Discover the Roots of RCIA in the Church’s History

The Catholic Church is a church of converts. Ever since Saint Peter preached the first homily on Pentecost Sunday, the Church has been attracting converts from every race, language, nation and culture. Those of us who were baptized as infants at the request of our parents have been members of the Church for as long as we can remember. But for those who weren’t raised in a Christian household, baptism and entry into the Mystical Body of Christ was something that they may remember very clearly. For those who choose to enter the Church as adults, there is a formalized process called the Rite of Christian Initiation of Adults (often referred to as RCIA) which the Church established in 1972. In the decades since, countless people, both in the United States and around the world, have joined the Catholic faith through this process. But how was initiation into the faith conducted prior to the promulgation of the modern RCIA process? What was it like to become a Christian in the earliest centuries of the Church’s life? And how is modern RCIA similar, and different, to the initiation process of the early Church?

In a sense, we can say that the Church’s catechetical process of welcoming converts began the very day the Church was established – Pentecost Sunday. Chapter 2 of the Acts of the Apostles relates how fifty days after Christ’s resurrection, the Holy Spirit descended upon the Apostles while they were in Jerusalem and gave them the boldness and courage to speak out in the name of Christ, and to share the Gospel with all they encountered. After Saint Peter addressed the crowd – many of whom were foreigners visiting Jerusalem – three thousand people repented of their sins and were baptized (v. 14 – 41). This pattern of hearing the truth, repenting of one’s former sinful ways, and being baptized, provides the blueprint for all future catechesis.

From the very beginning of the Church’s life, the faithful found themselves surrounded by a culture that was hostile to the truth. Not only their fellow Jews – including many in the Sanhedrin – but also many Gentiles, nearly all of whom were polytheistic, resisted the Gospel message. For the first few centuries, Christianity was legally outlawed in the Roman empire. Despite these obstacles, the Church was able to develop a structure for initiating adults into the faith. The earliest record we have comes from Saint Hippolytus (170 – 235), who described a three-stage process for becoming Catholic.

Saint Hippolytus writes that at the beginning of the journey, the catechumenate is interviewed about the moral quality of his life, and whether he is prepared to take on the responsibility of living as a Christian. If the catechumen was living a moral life, he was permitted to enter a three-year stage of “hearing” the Gospel. Requiring the individual to spend three years learning about the faith helped to ensure that people weren’t joining the Church for superficial or illegitimate reasons. If someone is willing to take three years to learn about the faith before being allowed to enter, it’s probably a good sign that they’re being sincere! After the three years are over, the catechumen and his sponsor were again subject to an interview by the Church regarding whether their lifestyle and habits conform to Christian virtue. Then, at the Easter Vigil, they are formally received into the Church.

In the fourth century, the Church’s situation changed drastically. In February 313 the Roman emperor Constantine issued the Edict of Milan, which legalized the practice of Christianity in the Roman empire, allowing Christians to practice their faith freely and openly without the fear of official state persecution. Later that century, on February 27, 380, Emperor Theodosius issued the Edict of Thessalonica, which made Christianity the official state religion of the Roman Empire. With these breakthroughs in Church-state relations, the process of admitting catechumens necessarily changed. The legalization and eventual adoption of Christianity by the Roman government allowed for greater numbers of people to join the Church, including some who may have done so for motives that were less than sincere. As a result, the interviewing process began to include questions regarding one’s motivation for joining the Church. 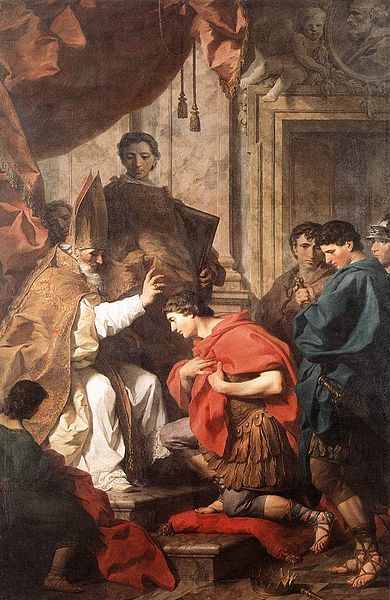 It was around this time that a threefold division of the catechumenal process came into focus. Saint Ambrose, bishop of Milan and mentor to Saint Augustine explained that these steps were known as the catechumenate, Lent and Mystagogy. He described the Lenten period as categorized by instruction in moral virtue. Catechumenates were given instruction in moral principles, derived from the Proverbs, as well as real-life examples of virtue to follow, drawn from the patriarchs of the Old Testament. This Lenten period of catechesis was meant to cleanse the individual of his prior sins and attachment to sin, to fill his mind and heart with good moral principles, and to prepare him for life as a Christian.

The period of mystagogy took place after the catechumenate was baptized. Now that he has put on the white robe of baptism and his soul has been cleansed of original sin, he is given a grave obligation: to remain united to the Mystical Body of Christ by cooperating with his newly-received grace and persevering in a life of moral virtue. This third period is the beginning of one’s life as a Christian, a period in which the newly baptized begins to live as a member of the Church and, with the help of the entire Church community, works to conform himself more and more to Christ.

How does modern-day RCIA compare to the early Church’s initiation process? Although the steps required to reach that point don’t look exactly identical, the Church’s modern RCIA is similar to the ancient process of receiving people into the Church. It begins with a period of evangelization, or the pre-catechumenate. During this time the individual expresses an interest in joining the Catholic Church and may speak with a pastor or RCIA director to express such interest. When the individual feels ready to begin formal RCIA, he asks the Church to accept him as a catechumen, through a ceremony called the Rite of Acceptance. After this rite, the individual is formally a catechumen, and his journey towards the Catholic faith is officially underway.

Once the individual has begun the step known as the catechumenate, he begins to learn all he can about the Catholic faith, through the help of his parish priest as well as the wider parish community. Similar to the ancient Church’s “interviews,” the period of the catechumenate includes examining one’s moral life, habits and ways of living, and making whatever changes are necessary, to order oneself more perfectly towards living a genuinely Christian lifestyle. The time frame of the catechumenate varies, but can take multiple years, if appropriate.

When the catechumen, as well as his parish community, believes that he is ready to join the Church, he participates in the Rite of Election. Normally held on the First Sunday of Lent, this is the point at which the catechumen’s name is written in the Church’s book, and he is now numbered among the Elect. This takes place near the beginning of Lent, because Lent is, for the wider Church as well as for the Elect, a period of prayer, fasting and almsgiving, a season marked by penance and mortification, in imitation of Our Lord’s time spent in the desert in preparation for His public ministry. For those preparing for Baptism, this Lenten period takes on special significance, as they prepare for their very first celebration of Easter as a full member of the Church that Christ founded.

The RCIA process culminates in the Elect’s formal reception into the Church at the Easter Vigil. At this time, the Elect receives the three Sacraments of initiation – Baptism, Confirmation and the Holy Eucharist – through which he becomes a member of the Catholic Church.

From this brief overview, we can see that the modern RCIA process, although structured differently, contains the same essential elements as did the ancient Church’s catechetical process. The individuals are prepared both interiorly and exteriorly for a life in conformity with Christ’s, they are questioned by the Church as to their intentions and desires, and they are instructed in the Church’s teachings. All of these elements serve to ensure both the Church and the individual that they are fully prepared for the tremendous transformation that is about to occur in their lives. The journey into the Catholic Church is for many a story of faith, of discovering for oneself the pearl of great price, hearing the Good News, and fully embracing it with faith, hope and love. From Pentecost Sunday until today, and undoubtedly until the end of time, the Church will always draw men and women of every age into a loving relationship with their God and Creator.